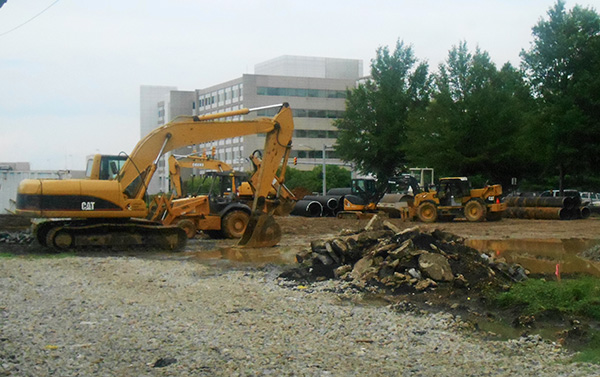 The work site at 1200 Semmes Ave. in Manchester. (Photo by Burl Rolett)

It’s the latest in a string of projects Miller and Gecker have put in motion in the Southside neighborhood.

“We have been and will continue to develop Manchester, I like to say lot by lot and block by block,” Miller said. “I think Manchester is the nicest new up-and-coming neighborhood in downtown Richmond.”

The three partners own the lot at 12th Street and Semmes Avenue through 1200 Semmes, LLC. Purcell is the majority partner in the joint venture, and his Purcell Construction is the site’s contractor. Middleburg Bank is financing the project.

The LLC bought the property from Gecker and Miller’s firm Urban Development Associates, which acquired it in 2005, according to city records.

Plans call for a clubhouse, onsite parking, a workout room and a rooftop deck with downtown views across the river.

“We’re actually going to have a dog walk area on the roof,” Miller said. “You haven’t seen that in Richmond yet.”

Miller and Gecker are also responsible for the Old Manchester Lofts, an 80-unit condominium building on Porter Street. Last year, they finished the 909 Perry Street Apartments, 44 units a few blocks away from 1200 Semmes. Perry Street has averaged more than 95 percent occupancy, Miller said.

Urban Development Associates owns about 30 acres and 140 parcels yet to be developed in the neighborhood.

They compete in the area with a flow of new projects, including the $8 million, 50-unit Belle Summit Apartments at 901 McDonough St., the 92,000-square-foot South Canal Lofts at 115 Hull St., and the Hatcher Tobacco Flats, a $17.5 million development at Bainbridge Street and Commerce Road.

As the Manchester renaissance takes shape, a full city block just west of 1200 Semmes hit the market a couple of months ago. Commonwealth Commercial is selling a block zoned for mixed use at 14th Street and Semmes Avenue for $3.2 million.

Joe Buhrman is handling the listing and marketing the 2.7-acre plot as a redevelopment opportunity.

“We’ve had folks that would look at it as keeping the buildings and rehabbing those, because you’ve got a lot of wide open spaces in there,” he said. “We’ve had other folks that have looked at it as taking the whole site down, scrapping the site and doing something else with it.”

Buhrman also said potential buyers have mentioned putting a multifamily development at the site. He compared the energy Manchester has developed in recent years to that of its neighbor north of the James.

“This is sort of an offshoot of what you’ve seen in Shockoe Bottom. Look at all the apartments that are over there, and the rents that those bring are maybe some of the highest in the city,” Buhrman said. “Young professionals that live there and maybe work in other parts of the city … they like being down there. I think Manchester has the potential to be like that.”