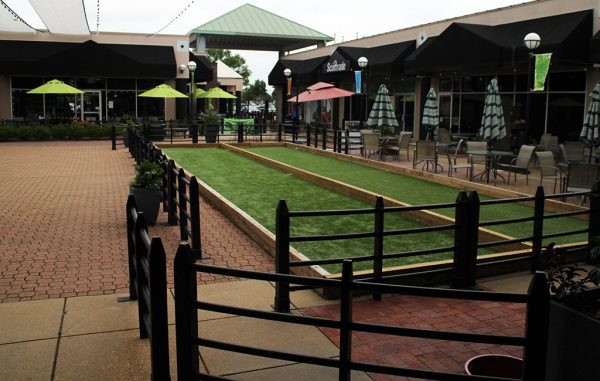 Atlas 42 will have bocce ball courts adjacent to its outdoor patio. (Mike Platania)

Sidney Gunst had a problem. He was faced with two vacant, adjoining spaces in his Innsbrook Shoppes strip center after two restaurant tenants closed down.

But Gunst, known as the mastermind of the surrounding Innsbrook office park, didn’t panic.

He decided to knock down a wall separating the former Sharky’s and Curry House spaces and build out a nearly 12,000-square-foot bar and restaurant, designed to have the feel of downtown breweries while also catering to Innsbrook workers.

He’s calling the spot Atlas 42, inspired by a statue of Atlas he rescued from being thrown out at Stony Point, as well as Douglas Adams’ novel The Hitchhiker’s Guide to the Galaxy. The statue is visible from the space’s large outdoor patio, which includes a bar. 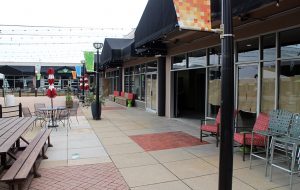 “I needed a creative solution to the problem,” he said. “I’ve got the space. Now I just need an operator.”

The real estate veteran doesn’t plan on running Atlas 42 himself, so he is interviewing prospective operators and aims for a July opening.

The bar will have no mixed drinks and serve only wine, champagne and canned beer. Gunst said he’s still deciding on a food menu.

The space will feature a large wall covered with a world map, with cutouts for cans. Gunst said he plans to have customers bring beer cans from unique parts of the world to contribute – an homage to Richmond being known as the first place where beer was canned.

Roger Turner is the general contractor of the project. Gunst’s wife is the designer.

Also within the Atlas space, at 4032 Cox Road, will be a closed-off room outfitted with a small stage, projector and sliding doors. Gunst said the “listening room” will be used for acoustic musicians or private meetings.

Mixing imbibing with entertainment is becoming popular around Richmond, particularly in the city. Scott’s Addition has two bar-arcades underway, while a bowling alley soon will rise on Boulevard.

What a cool idea! I don’t believe Sidney will ever retire. He has too much energy and too many good ideas. He called me yesterday about this concept and he was ramped up about it. I hope we can find him an operator.

Sounds interesting, but he might be cutting himself off at the knees by declining to install draft beer lines. People want fresh draft beer and lots of it. We’re living in the golden age of American beer and that won’t change anytime soon.