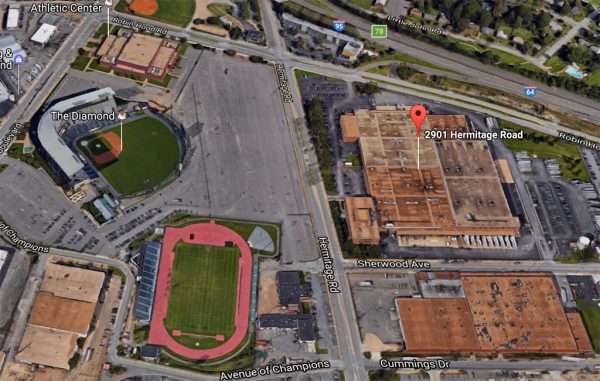 A state agency with a significant footprint near The Diamond is on the hunt for a half million square feet of real estate, potentially putting its current home in play as a site for a new baseball stadium.

A request for proposals went out Friday for the state Department of General Services, on behalf of the Virginia ABC, to secure larger office and warehouse space for the booze purveyor in the greater Richmond area.

The new facilities could replace ABC’s existing nerve center, which encompasses 292,000 square feet of office and warehouse space at 2901 Hermitage Road across from The Diamond. That 20-acre property was reported to be a likely site to house a new stadium for the Richmond Flying Squirrels.

“We’re at maximum capacity,” ABC spokeswoman Carol Mawyer said of the Hermitage complex. “We are using every inch of the space that we currently have.”

The state has tapped Divaris Real Estate’s Richmond division to field the proposals, which must be submitted by Aug. 11.

The RFP states that preferred sites would be in City of Richmond or Chesterfield, Henrico, Hanover, Powhatan, Goochland or New Kent counties.

Once all the proposals have been received, Mawyer said the agency and the Department of General Services will submit the best proposal to the General Assembly on Nov. 1 for possible funding by state legislators.

State leaders set aside $500,000 in the 2017 budget to start the initial leg of research to either expand the ABC existing facility, relocate its office and distribution operations to existing buildings, or construct a new facility either onsite or elsewhere. 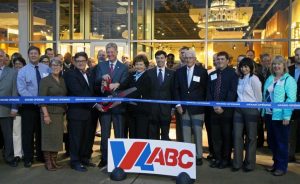 ABC officials marking the open of the Short Pump ABC store in December 2016.

The state-owned Hermitage Road complex includes 60,000 square feet of offices, with the balance dedicated to warehouse and distribution operations, according to city records.

ABC is looking for a “turn-key” option, which would allow for the agency to move its people, products and equipment into the new space quickly, Potter said. She added the option to renovate and expand ABC’s Hermitage Road operation is on the table, but would have to work around its employees and not impair day-to-day operations.

“We cannot cease operations because of the renovation, if that is the option selected,” Potter said.

As for potential sites that could accommodate such a project, John Jay Schwartz of Richmond-based brokerage Have Site Will Travel, which handles large industrial deals, said there are several options across the region conducive to the state’s request.

He cites spots off the Interstate 95 corridor near Ashland and in south Chesterfield County, Goochland County’s West Creek development, and the White Oak Business Park in eastern Henrico County near Richmond International Airport.

“The best thing is for the operation to be a consolidated location where the office is with the warehouse,” Schwartz said. “I think that’s what you’ll see happen.”

Given that ABC outgrew the Hermitage facility, Schwartz suggested moving the agency off the site to open it for another use.

“That site lends itself to something better … there are a number of more efficient uses for that space,” he said.

Schwartz isn’t alone in making such an assertion.

Local news outlets reported last year that the ABC’s 20-acre Hermitage property was a potential site for a long-awaited replacement for The Diamond.

That was followed by the announcement of a joint agreement between the Richmond Flying Squirrels, VCU and former mayor Dwight Jones’ office to “guide the final stages of planning for a new ballpark in Richmond to be used by VCU and the Flying Squirrels.”

Mayor Levar Stoney, prior to being elected, reportedly participated in the negotiations for that agreement, which stated the group was eyeing a $60 million stadium project at an unspecified site near The Diamond. Stoney has said he would support the project only if surrounding counties ponied up their fair share.

Emails to the mayor’s office about the status of any stadium plan were not returned by press time.

A new stadium on the ABC site would free up The Diamond’s to join surrounding parcels for a total of 60 city-owned acres bounded by North Boulevard and Hermitage Road. The city already has teased developers with what it would like to see on the site.

If ABC decides to leave Hermitage Road and a new stadium doesn’t materialize on the site, Schwartz said, the property could lend itself to mixed-use developments, large office space or residential development.

“There is lot of great potential for growth on that property,” he said. “At this point it really is up to the legislature and the city.”

Clarification: A previous version of this report stated that any proposed sites must fall within the City of Richmond or Chesterfield, Henrico, Hanover, Powhatan, Goochland or New Kent counties. Those are the preferred localities, but not required.

Money for schools and infrastructure would be better spent.

The school system could drive the city. Flight to Chesterfield and Henrico Counties for has been going on for 50 years. The Richmond Police Department could use help too – salaries commensurate with the outlying counties with, dare I say, better school systems.

The City of Richmond schools already has nearly the highest spending per pupil for all public school systems in VA.

This would be a great move by ABC, VCU, The Squirrels and the City. Moving the ABC to a new and better-suited warehouse would give much-needed improvements to one of the few profitable states ran agencies and allow for growth of the ABC infrastructure. Along with moving the Diamond front and center on the highway giving them a modern safe facility where advertising spots will be even more of a premium due to being that much closer to the highway views. As well as freeing up a large area of the super prime real estate on the Boulevard to do… Read more »

Why don’t we just privatize liquor sales. Selling off the ABC facility would yield a large, but one-time, chunk of cash for the Commonwealth.

Look at the aerial, which is dated. The Richmond repair facility,. next to Sports Backers Stadium doesn’t exist. Sports Backers Stadium isn’t going anywhere. If a new 7500 seat stadium is built where the repair facility is shown , which is the size the Flying Squirrels are looking for,( nestled up to the railroad tracks) and the money losing Arthur Ashe Center is demolished there is ample land for development on the balance of the land. The existing ABC facility is simply a potential bonus. The City of Richmond made yet another mistake by leasing City Stadium to the Kickers… Read more »

Ideally the state would follow the lead of Republic-National Distribution in Ashland and move to a site that’s readily accessible to I-95 and I-64 so that trucks can hit the road running before dawn to serve the states two largest markets in Nova and Hampton Roads. I don’t think they’ll find such a site large enough inside the City limits except south on Route 1 and that might cripple Drive times to the north. They’ll need to look near I-295 in Ashland. Then they avoid the morass of traffic in the 95/64 confluence. This move will free up a lot… Read more »

Please privatize the sale of Liquor. The selection in Virginia ABC stores is limited and forces me to look for craft quality products in other states. The state can still collect the taxes. The employees can work at private companies or in the tax collection / enforcement division. Prices will go down for consumers due to competition. Selection will increase. Tax revenues should increase due to lower prices and greater selection. Other states do it with great success. Pass laws and regulations to prevent “cheesy” ads and store fronts. It’s a Win Win for the State and the consumer.