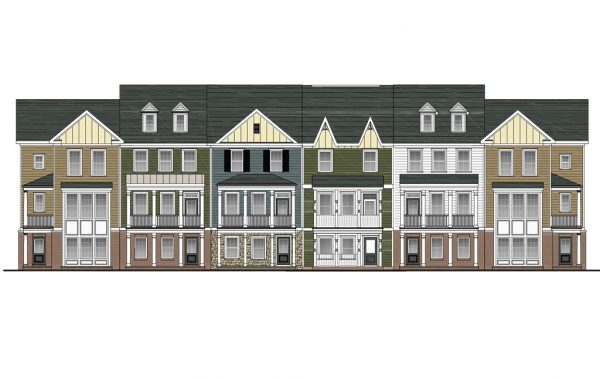 Midlothian West would include 275 apartments and 170 townhomes.

A Virginia Beach development firm led by the family that once ran Richmond International Raceway is revving up its plans for a mixed-use development in Midlothian.

BWS Enterprises LLC, run by former RIR owners Billy and Wayne Sawyer, is looking to develop up to 445 residential units and a retail area on land it owns on both sides of Old Otterdale Road. The site is south of Midlothian Turnpike, just west of the Kroger-anchored Ivymont Square Shopping Center.

Called Midlothian West, the development would comprise 275 apartments, 170 townhomes and retail uses closer to the turnpike. It also would include walking trails and open space, said LeClairRyan attorney William Shewmake, who is representing BWS in a related zoning case.

The request was scheduled to go before the Chesterfield County Planning Commission next Tuesday, but is being deferred to the commission’s Aug. 15 meeting. Shewmake said the additional time will allow BWS to receive additional input from stakeholders and the public. A community meeting on the project is scheduled for Thursday at 6:30 p.m. at Midlothian High School.

“We’ve been meeting with various stakeholders and community leaders and neighborhood associations and getting their input,” Shewmake said, “and we’ll be amending the case based on those conversations.” 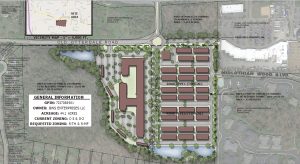 A site plan for the residential portion of Midlothian West, subject to change.

He said revisions likely would include proffers related to building design standards and drainage, which would be directed away from the adjacent Midlothian Wood neighborhood. While the rezoning would allow up to 475 residential units, Shewmake said the project would stand at 445.

“This ultimately will be a mixed-use development that will be not only consistent with, but forwarding the vision of the Midlothian village,” Shewmake said, referring to the commercial district farther east along the turnpike. He said meetings have been held with the Midlothian Village Coalition, which oversees that district, as well as adjacent property owners and neighborhood associations.

Shewmake said he could not speak on the overall development cost for Midlothian West. BWS purchased the two parcels in 2000 for $5 million, according to county property records. Attempts to reach Sean Sawyer, the contact listed on BWS’s zoning application, were unsuccessful by deadline.

Brothers Billy and Wayne Sawyer sold RIR in late 1999 with their father, Paul Sawyer, who led the racetrack’s transformation from a dirt track to the current raceway complex. In addition to BWS, Wayne Sawyer is an investor in a 37-acre mixed-use development proposed in Centerville in Goochland County.

Shewmake said the apartments would range from one to three bedrooms and include elevator access. The townhomes, which he described as upscale, would be a mix of two- and three-story units.

Shewmake said the square footage for the retail area has yet to be determined.

The Midlothian West site is just west and across Midlothian Turnpike from the 25-acre property planned for Winterfield Crossing, a mixed-use development proposed two years ago that has struggled to secure approval from the county. Shewmake said he’s not concerned about a similar fate for Midlothian West.

“I think they had various issues and a certain view of what their development should be, and they’ve been having to have that dialogue,” he said. “We’ve been spending a lot of time before we filed this case meeting with community leaders, giving a lot of thought about how this should fit in with the village concept.

“We’re moving for a deferral, but we think we’re fairly far along and we’ve been proactive.”

Yeah upscale!! But are you talking Jimmy-Johns upscale or Firehouse Subs upscale?