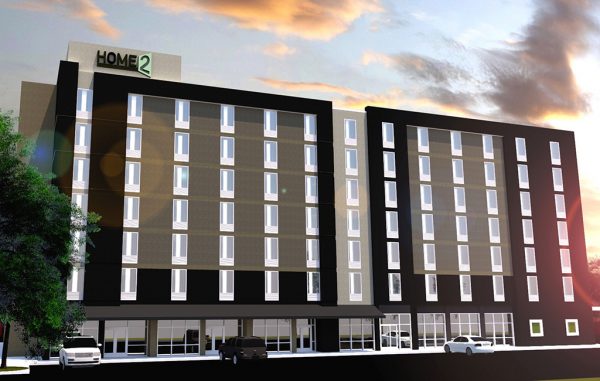 The Richmond market’s largest hotelier is going for the trifecta in the western end of Short Pump.

Shamin CEO Neil Amin said the company is preparing to break ground on the seven-story, 135-room project in 2018.

It will take shape at 209 Towne Center West Blvd., which sits across the lot from Shamin’s Hilton Richmond Short Pump. The company also is developing a 126-room, six-story Hampton Inn & Suites on about 4 acres across Broad Street, just west of the GreenGate development.

Home2 Suites will join another new-to-the-market hotel in the vicinity.

Drury Development Corp. is planning an eight-story Drury Plaza Hotel on a 3-acre parking lot in the WestMark Office Park at 11049 W. Broad St., across from Innsbrook. 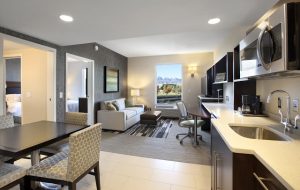 The hotel brand’s “working wall” spans the length of a guest room to create zones for the kitchen, bedroom and living room area. (Shamin)

Shamin’s in-house architect Michael Sweeney is overseeing the design and engineering work on the Home2 Suites. No general contractor has been selected for the project, Amin said.

He would not disclose expected costs for the project. The company purchased the 2.3-acre site in April 2016 for $1.8 million.

Home2 Suites is an extended-stay hotel brand that operates more than 80 hotels across the U.S. and three in Virginia – two in Northern Virginia and another in Roanoke. It plans to open additional locations by yearend in Stafford and Woodbridge, according to its website.

The Short Pump location will offer a mix of studio and one-bedroom suites. Each room will be equipped with the hotel brand’s “working wall,” Amin said, which spans the length of a guest room wall to create zones for the kitchen, bedroom and living room area. The hotel will include an outdoor patio and a pool area.

Shamin owns dozens of hotels, mostly in Virginia, including more than 30 around metro Richmond. Its other holdings around Short Pump include the Aloft Hotel at 3939 Duckling Drive in the West Broad Village development.

The company has another new hotel in the works at 501 E. Franklin St. in downtown Richmond, where it is converting an old office building into an 87-room Moxy Hotel by Marriott.

What happened to the Boomerang Air Sports park that was planned for that site?

The Shamin Group owns the ALoft and the Hilton. If anyone knows the market there and the demand for more rooms, its them. Its just another sign that the Richmond market is expanding, and hotels are tax revenue cash cows.

There are twenty (yes, count ’em, 20) existing hotels or extended stay properties within a 3 mile radius of these three new projects. Aside from filling the pockets of developers and the Henrico County tax coffers, there seems to be no reasonable/rational basis for approving and building these properties. When there’s a dollar or profit to be made, they just can’t stand to leave a tree standing. More hotels are not what this already heavily traffic-congested area needs. Watch out Goochland residents —- you’re next and you’re not safe from this unbridled over-development.