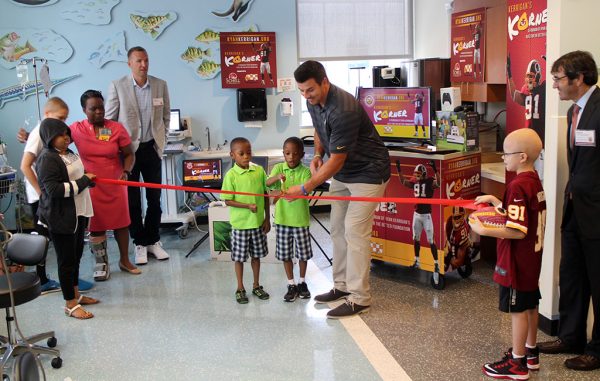 As the Redskins’ training camp was leaving town ahead of NFL preseason, one of the team’s star players stayed behind in Richmond to cut some ribbon.

Ryan Kerrigan unveiled his Kerrigan’s Korner at the Children’s Hospital of Richmond at VCU on Monday. Kerrigan’s Korner is a part of his Blitz for the Better Foundation, and gives kids and their families access to PlayStations, tablets and games during hospital stays. The foundation has installed eight such play areas in hospitals around the D.C metro area.

The outside linebacker, who has played for the Redskins since 2011, unveiled the Richmond area’s first Kerrigan’s Korner earlier this month at Bon Secours St. Mary’s Hospital.

“It’s basically an escape for kids who have extended stays in hospitals … We’re really excited to now be in two hospitals here in Richmond,” Kerrigan said at Monday’s event.

The downtown effort was sponsored by Schell Brothers and Virginia Linen Services. The Korner is on the first floor “sky lobby” in the Children’s Pavilion at 1000 E. Broad St.

Kerrigan’s Blitz for the Better Foundation was founded in 2013 and is based in Washington, D.C. It hosts events, fundraisers and programs for children who are seriously ill, have special needs or are physically challenged.