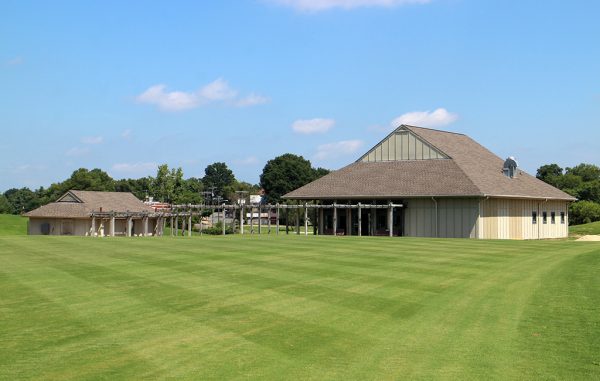 The clubhouse (right) will be renovated, and the smaller structure on the left is due for demolition. (Michael Schwartz)

One of the only public golf courses in the city limits – albeit only six holes – is getting a makeover aimed in part at driving more traffic from nearby residents and downtown workers.

First Tee of Greater Richmond, a nonprofit that uses golf as a means for youth outreach, announced a plan last week for $1.2 million in upgrades to its facility at 400 School St.

The work is funded by donations from VCU Athletics and includes restoration of the course’s six holes, which will become a practice facility for the university’s golf team and be open to the public, as well as a revamped driving range and clubhouse.

The facility, built on part of an old city landfill, is closed for renovations and expected to reopen this fall. First Tee also operates a full 18-hole course in Chesterfield County. The course’s land is still city-owned, and First Tee has a long-term lease for the property and is responsible for upkeep.

Brent Schneider, CEO of First Tee of Greater Richmond, said the effort at its city course has in mind youth programs and VCU, but also aimed to drive revenue from a growing population in the city. 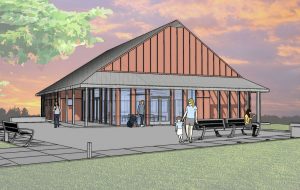 Rendering of the planned clubhouse renovations.

“Obviously we welcome youth first, but we welcome the public,” Schneider said. “We’re the only course with a (downtown) skyline view. You’ll see professionals with their ties tucked in at lunchtime hitting balls. And I feel like there’s an opportunity for a lot of folks who are finding their way back to the city who maybe haven’t played golf before or haven’t had time to play.”

“We welcome the nontraditional player. The millennials who don’t think golf is very cool may find an opportunity to come out and give it go,” he said. “We have six holes, it’s a lot more time-conducive than playing a full course.”

Hourigan Construction is renovating the clubhouse. The work includes gutting and reshaping the interior of the building to help house two golf simulators, after-school space for kids and a small retail shop. Flourish Spaces designed the interior. The clubhouse portion of the project is funded entirely by First Tee donors.

Work on the practice tee was completed earlier this summer. The costs for new turf were around $580,000, Schneider said, about 80 percent of which is being paid for by VCU.

Work on the course itself was completed last summer. The changes included clearing brush and some trees, re-sodding the fairways, fixing bunkers and converting the greens to Champion Bermuda grass. It’s one of at least two local courses to use Champion Bermuda greens, the other being Independence Golf Club in Chesterfield. 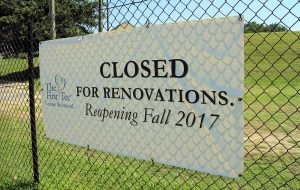 The facility is expected to reopen next fall. (Michael Schwartz)

The design improvements are being led by renowned golf course architect Lester George, who created the initial design for the site as well as The Tattersall Youth Development Center at the First Tee Chesterfield course.

Schneider said First Tee has taken some inspiration from Independence owner Giff Breed, who’s known for experimenting with nontraditional, non-golf activities to drive people to the club and drive revenue, in addition to upgrading the course itself.

It’s about “inclusion and innovation,” Schneider said. “We really want our customers and participants to feel welcome and we want it to be high quality.”

Schneider wouldn’t disclose First Tee’s larger donors for this project, but mentioned support received over time from some of the organization’s founding board members, such as Fred Tattersall, Bobby Ukrop and Bill Goodwin.

The nonprofit operates with a $2.5 million annual budget. About 25 percent of that is derived from revenue at its courses, with the rest from fundraising. Schneider said its 18-hole course in Chesterfield, at 6736 Huntingcreek Drive, drew in about 24,000 rounds of golf last year and is on pace to eclipse that in 2017.

It expects to serve 70,000 kids through programs this year. It offers life-skills experience programs, with golf as a part of the curriculum, and also brings other nonprofits to its facilities, such as the Boys and Girls Club. And it’s implanted golf as part of the physical education curriculum at dozens of elementary schools around the region.

I can’t wait to see the final product! Congrats to Brent and the First Tee of Greater Richmond!!