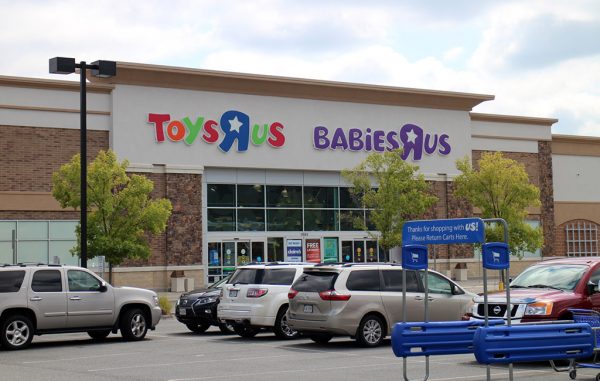 A Toys ‘R’ Us store in Short Pump, one of three in the region. (Mike Platania)

Geoffrey the Giraffe has taken a tumble into Richmond courts.

The chain, which has around 1,600 stores, is looking to reorganize as it’s faced with more than $5 billion in debt and looming interest payments.

It’s the second national retailer this year to look to Richmond bankruptcy court as a refuge in a turbulent time for parts of the industry. In June, Gymboree filed Chapter 11 here, also with billions in debt.

Richmond bankruptcy courts are viewed as something of a soft landing pad for big, indebted companies from out of town. The local court and judges have earned a favorable reputation among large corporate debtors in the way they handle bankruptcies.

Gymboree’s filing wound up being local attorneys’ gain, as the case brought with it plenty of work for local law firms.

That theme is already being repeated with Toys ‘R’ Us’ filing, as the lead local legal team representing the company is a group from the Richmond office of Kutak Rock, consisting of attorneys Michael Condyles and Jeremy Williams, according to court records. They also represented Gymboree.

The Journal reports Toys ‘R’ Us is facing tighter terms from suppliers who are fearful of the company’s status as the holiday season approaches. The toy store relies heavily on holiday shopping – 40 percent of its $11.5 billion in revenue for the last fiscal year was earned during the holidays.

The company said its stores and online sales continue to operate worldwide during the bankruptcy process. It said the majority of its stores worldwide are profitable.  It has three locations in the Richmond region, including a Toys ‘R’ Us/Babies ‘R’ Us combo store in Short Pump.

The company said the filing is aimed at ensuring “the iconic Toys“R”Us and Babies“R”Us brands live on for many generations.”

“Today marks the dawn of a new era at Toys“R”Us where we expect that the financial constraints that have held us back will be addressed in a lasting and effective way,” Chairman and CEO Dave Brandon said in a prepared statement.

[…] Payless Shoes, Bebe and Radioshack are closing outposts in town as part of mass closures, while Toys ‘R’ Us and Gymboree, the latter of which is closing four local stores, have filed for bankruptcy in […]

[…] Condyles, a local attorney with Kutak Rock whose bankruptcy work includes the ongoing cases of Toys ‘R’ Us, said other than in prepackaged filings, it’s difficult to know at the outset how long such a […]