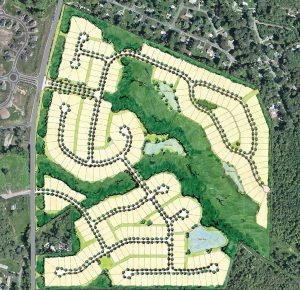 A Glen Allen-based homebuilder is eyeing nearby Goochland County for its next residential project.

Eagle Construction of VA is seeking approval for as many as 308 single-family homes on about 153 acres at 1515 Hockett Road, south of Broad Street Road on three parcels between Hockett and State Route 288.

A request to amend existing zoning to allow the development is on the Oct. 5 agenda for the Goochland planning commission. A community meeting on the project’s impacts was held Monday evening.

Eagle is proposing the development through two LLCs: Readers Branch Partners LLC and Hockett Road Partners LLC, which purchased three parcels that make up the tract earlier this year.

Plans submitted to the county call for detached single-family houses with a minimum of 2,200 square feet. About one-third of the property would serve as open space.

Scott Gaeser, principal broker with Eagle’s Precision Realty, said the homes would likely be comparable to those in Eagle’s Parkside Village community, where houses range from 2,000 to 2,900 square feet with three bedrooms and two or three bathrooms. Homes in Parkside Village, near Wyndham, are priced starting at $396,400.

Gaeser said the Readers Branch homes would not be age-restricted, and he noted the property is already zoned for the requested use from two previous zoning cases that have since been combined. This latest rezoning would add proffers to comply with current development standards.

Those proffers – conditions agreed to by a developer – include a 100-foot buffer along Hockett Road and cash payments of $1,585 per home to offset impacts on public infrastructure.

Also on the agenda for the Oct. 5 meeting is a rezoning request by Dover Branch LLC for a five-lot subdivision on about 11 acres on Dover Branch Lane, northeast of the intersection of Manakin and Hermitage roads. The new houses would average 4,000 square feet with minimums of 2,800 square feet.

A community meeting on that project is scheduled Wednesday at 6 p.m. at Station 1-Manakin, 180 River Road W.

The commission also was scheduled to consider a rezoning for HHHunt’s planned 520-home age-restricted community on just over 200 acres near Capital One’s West Creek campus. The 55-and-up development, first proposed in February and located about a mile south of the Readers Branch site, would consist of 339 single-family homes and 180 townhomes.

HHHunt has asked to defer its request to the commission’s November meeting. Senior Vice President Kim Kacani said the additional time will allow the company to comply with county requirements.