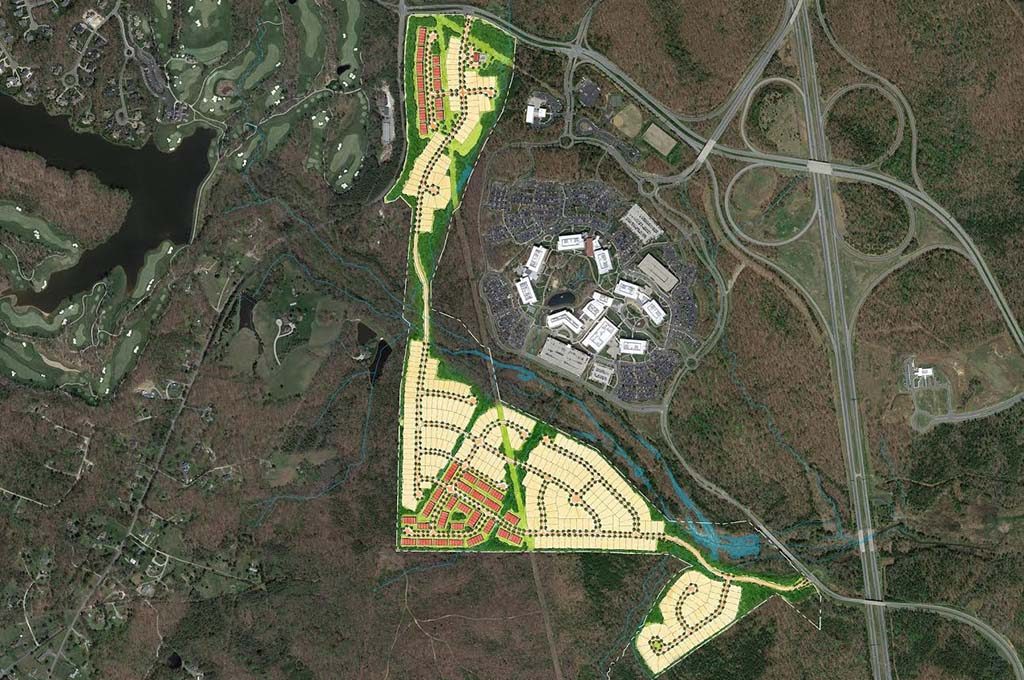 A 520-home development is planned for the site, which comprises 200 acres. (Courtesy HHHunt)

Capital One could be getting a lot of new neighbors next door to its West Creek campus.

HHHunt is planning a 520-home age-restricted community on just over 200 acres along the west and south sides of the credit card behemoth’s Goochland County headquarters.

The development, for residents ages 55 and up, would stretch from Tuckahoe Creek Parkway northwest of the campus, wrap around it to the south and cross Broad Branch creek, and connect with Broad Branch Drive just west of Route 288.

HHHunt, the developer behind communities like Wyndham, Wellesley and Twin Hickory in Henrico County and Charter Colony in Chesterfield, seeks rezoning to accommodate the project. A public meeting on the project is scheduled for Monday.

A notice on Goochland County’s website says the development would comprise 339 single-family homes and 180 townhomes. Documents filed with the county call for the single-family homes to be about 2,000 square feet, and all homes to have at least one resident who is 55 or older, in accordance with federal and state housing laws.

Plans also call for a 5,000-square-foot clubhouse with pool, walking trails and green space, and landscaping or fencing. The first 50 homes and the clubhouse would be built in the first year of development, and as many as 270 homes would rise after four years.

The documents, submitted by HHHunt Land LLC on Jan. 26, indicate the developer has an option to purchase the property, which is part of the 3,500-acre West Creek Business Park, owned and operated by The Pruitt Cos. and Bill Goodwin’s Riverstone Group.

Kim Kacani, a senior vice president with HHHunt, said the site’s proximity to area shopping and medical facilities was appealing for a 55-and-up community.

“It’s a niche that we don’t feel is served in that area,” she said. “We’ve found that people who are ready to downsize and want to travel more, they have to leave their community to do that. This provides a niche where they can stay in their community and downsize.”

Kacani said it’s too early to estimate development costs and that the company does not typically release such figures.

HHHunt is working with Mechanicsville-based Youngblood, Tyler & Associates, which is providing engineering and surveying. Homebuilders have yet to be selected for the project.

HHHunt has not yet filed a rezoning request with the county, which requires a community meeting before an application can be filed. Monday’s meeting will start at 6:30 p.m. at the Manakin Fire-Rescue station at 180 River Road W, Manakin-Sabot.

The development would be HHHunt’s first in Goochland and the first of its kind for West Creek, which has been transitioning from a primarily business and office park to include residential developments and new uses such as breweries.

At the southern end of the park, The Pruitt Cos. is proposing a development of retail and residential uses at the 288-Patterson Avenue interchange. A rezoning request for that project was deferred last month for 60 days.

Riverstone Properties, the real estate arm of Riverstone Group, is developing a 47-home community on 73 acres near Kinloch, along Tuckahoe Creek Parkway just west of Capital One.

Meanwhile, HHHunt is juggling several sizable developments around Richmond. It is planning a 366-acre development in Hanover County, where a disputed connector road with Wyndham has prompted a lawsuit against Henrico County. It also is planning its 1,000-home River Mill community near Virginia Center Commons.

HHHunt builds quality communities wherever it goes. This will be no exception with the Pruitts looking over their shoulder. The active adult (over 55) market is huge and will continue to flourish for the next 15-20 years, per demographic studies. Some studies indicate that this generation of boomers prefers mixed-age communities over the “Sun City” model of exclusively elderly.