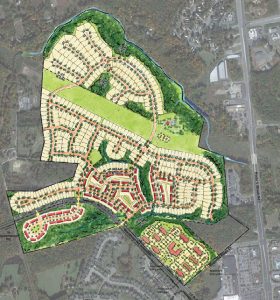 The development would take shape just to the west of Brook Road. Site plan from HHHunt.

The developer behind some of the area’s largest suburban communities has its sights set on 250 acres near Virginia Center Commons.

HHHunt is planning more than 1,000 new homes on seven parcels of primarily wooded property across Brook Road from the mall in northwestern Henrico.

The project would require a number of rezonings, which the Henrico County Planning Commission is set to consider March 10.

Daniel Schmitt, president and COO of HHHunt, said the company has been eyeing the area for some time. The seven parcels that make up the 250 acres are currently under contract, several of them assessed at values exceeding $1 million.

“We’ve been acquiring the land for probably five years,” Schmitt said. “We just think it’s a great location, given the proximity to retail in the area and (Interstate) 295, which is a great access arterial.

Schmitt also noted the planned 88-acre Greenwood Park that the county is developing at 11217 Greenwood Road. A planned extension of Woodman Road from its I-295 interchange would eventually provide access to that park as well as a connection with Brook Road.

Schmitt noted the park, to consist primarily of sports fields, would be nearly contiguous with the Rivermill property, which also is bordered to the north by the Chickahominy River. Located west of Brook Road’s intersection with Magnolia Ridge Drive, the property also surrounds Little Five Azalea Farm, a landscaping materials site at 10180 Brook Road.

Kim Kacani, HHHunt’s vice president of land acquisition and business development, said the company would build the project’s apartments through its multifamily construction arm, HHHunt Apartment Living. HHHunt Homes would also be one of four builders for the rest of the project, the remaining three to be determined. 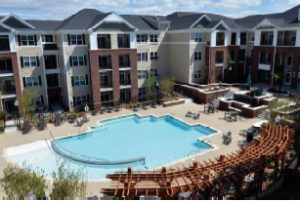 A conceptual rendering of the project’s apartments.

Kacani noted a power line easement that runs through the middle of the property would provide additional open space, similar to HHHunt’s Twin Hickory community. The development would also include a trail and park along the river, a clubhouse, a pool, and street trees and sidewalks.

If supported by the planning commission and approved by county supervisors at their April 12 meeting, Kacani said development could start by spring 2017, with home construction starting with the apartments that fall. She said the first homes could be occupied by early 2018.

Kacani said an overall project cost has not been determined, and she was unsure if financing had been finalized. Locally based Citedesign is the land planner on the project, Timmons Group is the engineer and Green Light Solutions is the traffic engineer. Hirschler Fleischer attorney Jim Theobald is representing HHHunt in the county review process.

The company held a community meeting for area residents on Feb. 17. Kacani said the project was “fairly well received,” with attendees most concerned about traffic patterns and impacts.

“This also provides rooftops to revitalize the corridor of Route 1, so I think that’s a positive,” she said. “Anytime with something new, there’s going to be concerns. I think HHHunt’s reputation precedes it, and where we go, we tend to look at our projects in the context of the area around it and complement it.”

In addition to Twin Hickory, HHHunt’s other projects around Richmond include Wyndham, Wyndham Forest and Wellesley in western Henrico and Charter Colony in Midlothian. The company is also developing a 240-home community near Wyndham that received zoning approval last year.

Schmitt said Rivermill would continue the track record established with those communities.

“Our strength and ability over the years has been to develop master planned communities with amenities and different housing products,” he said. “This project would be a continuation of that for us.”

Great reporting, first I have heard of this proposed development. I’m curious, was there any discussion of biking and walking? The reporter’s quotes only mentioned the automobile connectivity.

My hope is that this will drive a developer to rehab vcc mall. That would probably mean tearing it down and starting over again but I’d like to see it brought back to its glory either way.