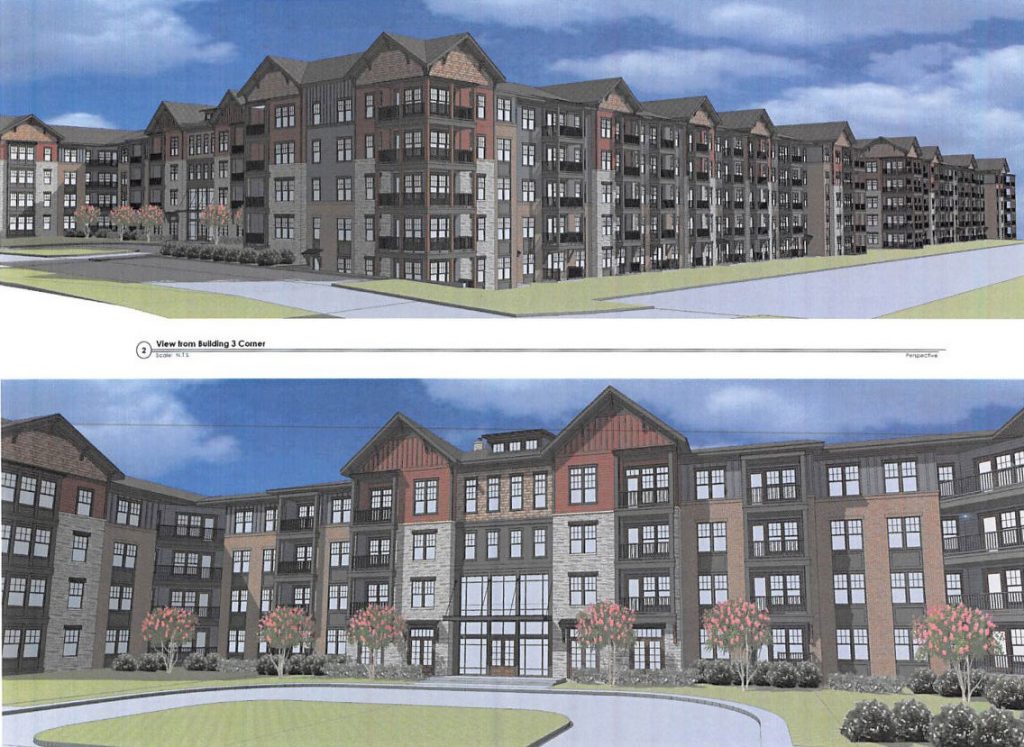 Renderings of the Bristol project.

The 3,500-acre park in eastern Goochland County is adding more apartments to the mix with last week’s approval of a conceptual master plan for the 373-unit Bristol at West Creek.

Tennessee-based Bristol Development Group is developing the project on 22.5 acres at the interchange of West Creek Parkway and Route 288, within the northeastern quadrant formed between the interchange and Broad Branch Drive.

The site is just west of Hardywood Park Craft Brewery’s new planned facility and southwest of the Capital One complex and CarMax headquarters – all of which the new apartments could immediately serve.

While West Creek is already home to apartments – the 254-unit Retreat at West Creek in the northern-end Notch at West Creek development – the Bristol apartments signal the first multifamily housing in the business park’s original section near Patterson Avenue.

Michael Pruitt of the Pruitt Cos., which owns and operates West Creek with partner Riverstone Group, part of Bill Goodwin’s CCA Industries, said the addition of the apartments continues West Creek’s transition from a largely corporate park to one with a variety of uses.

“As time goes on, there will be a mix of different uses that we will see within West Creek,” Pruitt said. “We obviously have corporate office locations that are out there, but West Creek is a large project, and I think to make it a viable project, we’re going to have to see different uses in the park. That’s just going to make the park a more dynamic place.”

Messages left for Bristol Development Group were not returned in time for this story. Pruitt declined to speak about the Bristol development specifically or a timeline for the project, but he acknowledged the site’s proximity to the park’s corporate users. While the apartments could appeal to workers at those sites, Pruitt stressed that the apartments would not be exclusive to those sites.

“This creates a place for anyone to locate in this area,” he said, “another opportunity to live there.”

The 22 acres was purchased Jan. 12 by Bristol Broad Branch Partners LLC, according to county property records. The group purchased the site from RGBD LLC and PBD LLC. The sale price was not specified.

The property was most recently assessed at $3.16 million.

According to project documents, Bristol at West Creek will consist of 373 apartments, with 176 one-bedroom units and 197 with two-bedrooms.

The site will consist of multiple buildings, including some reaching three to five stories in height and two two-story buildings for the townhomes, all with wood-framed construction and elevators included. The buildings will total 376,000 square feet and require 746 parking spaces – two per unit.

Amenities include a 5,000-square-foot clubhouse with a gathering room, an Internet café, a fitness studio, a mail center and high-speed Internet access. The site will also include a pool, shade structures, outdoor kitchens and gathering areas, a fire pit, a pet recreation and wash area, and a bicycle storage area.

The conceptual plan avoids wetlands on the property, according to project documents. The developer worked locally with engineering firm RK&K and Poole & Poole Architecture.

Meanwhile, West Creek’s northern end is adding new uses, including a hotel and retail component that got underway last fall.

That’s a great sale on the part of the West Creek partners. I look forward to seeing Bristol’s new communities there and on Brook Road.

Their Brook Road site has the potential–coupled with the successful “The Spectrum” apartments–of opening that corridor to much needed rezonings and redevelopment.

Hopefully the Goochland county planners and supervisors demand more from these developers than Henrico does. The new apartments I drive by every day built by Stanley Martin Homes beside the new Cabela’s on Broad street remind me of a comment made by a Bizsense reader a while back… “It looks like a brick truck collided with a siding truck.”

Poole & Poole has a long history of bringing well designed and quality construction to multi-family projects on the East Coast. While they are located in Richmond their work spans from Florida to Tennessee to Wisconsin and to Maryland. Do not fear Justin.

Is that a real rendering of the project? It looks like section 8 housing; designed to fit as many people as possible in one space. Who designs a five story apartment building with zero landscaping these days? I pity any one who has to live there. Architecture should elevate people, not imprison them.