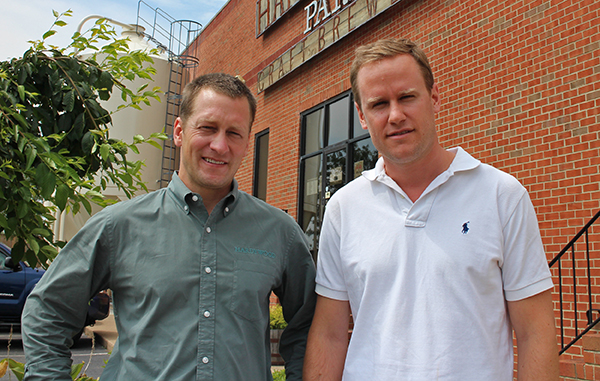 Monday’s announcement that Hardywood Park Craft Brewery will build a new facility in Goochland County was not only welcome news for the local craft beer market, but also for West Creek Business Park.

The 3,500-acre park has notched new developments at its northern connection with West Broad Street, but its original section near Patterson Avenue has seen less movement in recent years.

That southernmost end is where Hardywood plans to build its facility, which will consist of a 60,000-square-foot brewery, a packaging and distribution facility, a taproom and beer garden, agricultural fields, a food truck plaza, an amphitheater, bocce courts and walking and biking paths.

As part of its $28 million investment in the site, the brewery is purchasing the 22-acre property from the Pruitt family’s Pruitt Cos., which owns and operates West Creek with partner Riverstone Group, part of Bill Goodwin’s CCA Industries.

Michael Pruitt, who leads the real estate firm with his uncle, Tommy Pruitt, said the addition of Hardywood to that first phase of West Creek is a boon for the park, which was originally developed in the 1980s for a Motorola plant that never came to be.

The phase closest to Patterson, just west of the Henrico County line, is home to several office buildings, including the Federal Reserve Bank of Richmond and the Virginia Farm Bureau, where Monday’s announcement was made. But several parcels in the section remain vacant.

Michael Pruitt said Hardywood brings a different use to the largely corporate park. 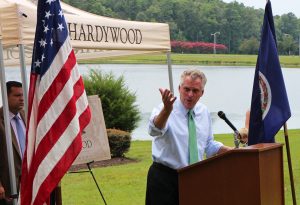 “We think it’s great to have new activity down in that area,” he said. “There are some other deals that are also in the works down there that are in different stages, but it just brings new life to that area.”

Pruitt said a change in strategy in the wake of Motorola allowed the park to focus on corporate tenants. But if the company relied only on corporate users to fill the park, “it’ll take us 100 years to do that,” Pruitt said.

“Having different types of users that can exist together brings uniqueness and vitality to the park,” he said. “And I think having that right mix is exciting.”

Hardywood President and co-founder Eric McKay said Monday the brewery looked at more than 100 locations before deciding on the West Creek site, which also comes with an option to purchase an adjacent 11-acre site with frontage along West Creek Parkway. The 22-acre site, which consists of two parcels, is located alongside Tuckahoe Creek – an amenity that appealed to the brewery, Pruitt said.

“They clearly have a vision for where they see themselves going, and I think one of the things that that entails is creating a kind of place for their new brewery,” Pruitt said. “Part of that is the ability to host gatherings, so the idea of being along that natural area was really appealing to them.”

Pruitt declined to discuss details about the land deal. The two parcels that make up the site were most recently assessed by Goochland County at about $1.7 million. The adjacent 11-acre site is valued at $1.5 million.

By the time the brewery considered the site, West Creek was on a short list of locations, Pruitt said. Russell Wyatt and Joe Buhrman with Commonwealth Commercial brokered the deal, and McKay thanked them Monday for helping to narrow the list down to one.

“This place is extraordinary,” McKay said Monday. Noting the site’s location beside Tuckahoe Creek, he added: “I think it’s going to be one of the prettiest breweries in the country just based on the setting that it’s in.” 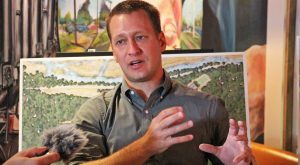 At the brewery’s Richmond location on Tuesday, McKay and co-founder and brewmaster Patrick Murtaugh described the West Creek site as ideal for its plans to host craft beer festivals, concerts and other events, in addition to those already held at its current facility.

Murtaugh and McKay said that facility, on Ownby Lane in the city, would remain a vital part of Hardywood’s operations. Hardywood will be able to triple its barrel output with the addition of the second brewery.

“We want to continue investing in the Richmond city location to make it a better and better experience for visitors,” McKay said.

Murtaugh added that the city facility would be used to focus on creating new recipes.

“We really want to make this a creativity center,” he said. “It’s really nice to have a separate space where you can really just breed creativity.”

In explaining their leap into a new facility, McKay likened Richmond to Portland, Oregon, where he said craft beer has a 50 percent market share.

“Local craft beer in Virginia still has a 2 percent share,” McKay said. “So we look at that as being a sign of what the potential could be, and I hope this next step is a great way for us to tap into that potential.”