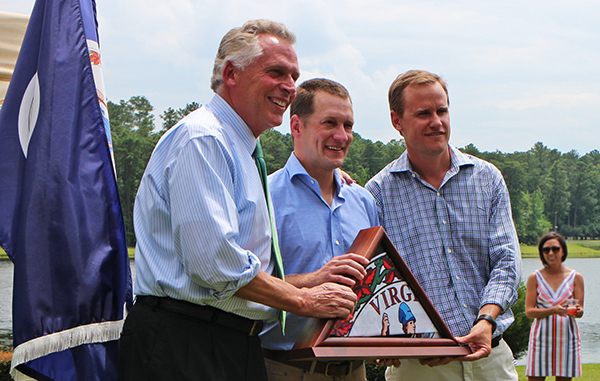 Gov. Terry McAuliffe has gotten a good taste for beer.

Less than a year after announcing the arrival of Stone Brewing, which is building its East Coast facilities in Richmond, the first-term governor raised a pint again Monday to local brewery Hardywood Park, which is expanding its operations into Goochland County.

The 4-year-old brewery plans to build its second facility in the West Creek office park in a $28 million project that will include a 60,000-square-foot brewery to triple Hardywood’s current barrel capacity, president and co-founder Eric McKay said.

In addition to the brewery, the project will include a packaging and distribution facility, a taproom, amphitheater, garden and equipment. The facility will add 56 jobs and will be funded with assistance from more than $1 million in state grants and additional matching funds pledged by the county. Hardywood’s original brewery on Ownby Lane near The Diamond will remain operational. 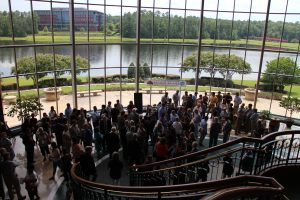 The governor made the announcement near the Hardywood site at the Farm Bureau building.

McKay said the company looked at 150 locations before deciding on Goochland, and he described some as easier options.

McKay said the company had considered the Raleigh-Durham area in North Carolina, where he said breweries are also allowed to distribute their own beer, up to 25,000 barrels. But he said the incentive package Virginia offered made the choice an easy one.

“I don’t think we could’ve done it otherwise,” he said. “It’s a huge step that we’re taking – building a brand new facility, keeping the current facility in place. There’s a lot of challenging pieces of the puzzle to put together, and that was a huge component to making that puzzle fit together nicely.”

In return, Hardywood is agreeing to invest $28 million over the next five years and purchase 300,000 pounds of product from Virginia farmers – a commitment McAuliffe said would create $1.4 million of agricultural activity.

Without the new facility, McKay said Hardywood would exceed the current 18,000 barrel capacity of its Ownby Lane brewery in about 1½ years. By the time the new facility is operational – he said construction would start in December 2016, with an opening slated for spring 2017 – McKay said capacity is expected to exceed 40,000 barrels.

He said the expansion would allow distribution to expand in markets such as Maryland, the Carolinas, Georgia and Florida – though not all at once, McKay noted. Hardywood beer is currently distributed in Virginia, Washington, D.C., and parts of eastern Pennsylvania.

“We stopped expanding our distribution geographically about a year ago, because demand’s been growing in the markets that we’re currently serving,” McKay said. “We’ve had to turn down a few projects and a lot of requests to distribute our beer outside of Virginia, but I think we’re on track to be able to have the new facility open right when we’re hitting that maximum capacity.”

In his comments, McAuliffe touted the state’s craft beer industry, which he said produces $623 million a year in economic activity and employs more than 8,000 workers. In addition to its 120 breweries, McAuliffe said the state boasts 25 distilleries, 10 cideries and 260 wineries.

Todd Haymore, state secretary of agriculture and forestry, said discussions about the Goochland site began about a year ago – over a glass of Hardywood beer.

I wonder if their spat with the City of Richmond of the meals tax dispute played any part in expanding in Goochland vs the city?