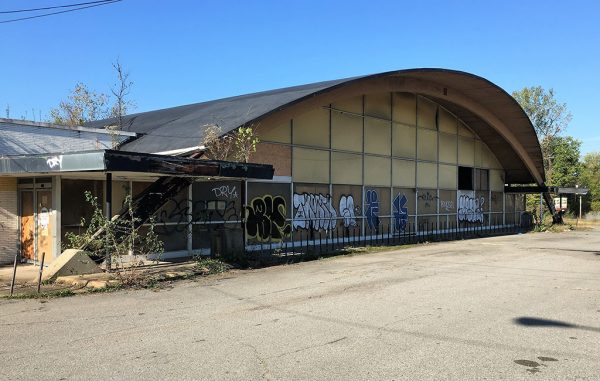 Michael Hild and Laura Dyer Hild earlier this month purchased the former Siegel’s Supermarket site at 2005 Hull St., adding to their collection of real estate nearby. Their holdings include three buildings a few blocks north being converted into a donut shop, brewpub and market/restaurant.

The Hilds’ Church Hill Ventures purchased the old Siegel property Oct. 10 from Strong Tower Pentecostal Church for $630,000, according to city records. It was assessed most recently for $412,000.

This is the couple’s first major investment south of the Cowardin Avenue/Jefferson Davis Highway corridor into the nearby Swansboro neighborhood.

Over the last few years they have become prolific landlords in the Manchester and Blackwell neighborhoods, snatching up two dozen derelict buildings and vacant lots.

Their latest deal involves one of the largest commercial properties along the Hull Street corridor, with a 20,000-square-foot building sitting on 2.4 acres along West 20th Street, stretching from Hull to Bainbridge streets with mostly surface parking.

Constructed in the mid-1950s, the Siegel’s store opened to great fanfare in 1957, according to city historic records.

“It was the largest and most expensive grocery store constructed in the Richmond area at the time,” Michael Hild said.

A 1957 advertisement in the Richmond Times-Dispatch shows the building cost $225,000 to construct, and included a parking lot that could accommodate 200 vehicles.

It was the second store at the time for brothers Charles and I.J. “Hip” Siegel, who owned their original market, established in 1935, on North Sixth Street downtown where the Richmond Coliseum now stands.

It’s the building’s architecture, Hild said, that was one of the main reasons he and his wife purchased the property.

“We were approached by a few people who were familiar with the work we were doing in Manchester, and thought that we should give the building a look,” he said. “The group had a very keen instinct on saving the building and not letting it fall into further disrepair.”

The front end of the building included ceiling-to-floor plate glass windows, which at the time gave pedestrians a full view of Siegel’s goods inside. It also included an arched marina – a barrel roof made with cedar planks – giving it an airplane-hangar style that Safeway grocery stores would later adopt in the 1960s.

Stuart Siegel was a teenager when his father I.J. and uncle Charles launched their Manchester venture 60 years ago.

“When I was 13 and 14 years old, I would go to work with dad and I’d bag groceries at the Manchester,” Siegel said last week.

Siegel’s Supermarket quickly grew into a staple of Manchester, sitting just blocks from the original Ukrop’s grocery store on Hull Street, both surrounded by a thriving neighborhood of residents and businesses.

“It was a friendly competition,” Siegel recalled.

Prior to selling their interests, the Siegel brothers – I.J. would go on to launch S&K Menswear – opened four additional stores in Richmond. That included locations near 25th Street and Jefferson Avenue in Church Hill and one in the Fan at Meadow and North Main streets where the bar District 5 now sits.

Three decades later, the vacant grocery building remains – albeit not in pristine condition.

Today, the storefront is boarded up and covered in graffiti, with a few window panes missing. A full trashcan sits at one end of the property, while the parking lot is covered in busted malt liquor bottles and potholes.

A second 4,000-square-foot building on site, which served as an ABC liquor store, was added to the property in the late 1980s. ABC would close that location in 1990s.

“Inside, there were bulletproof windows and rotating stations where they would serve the customer without any interaction,” Hild said of the ABC addition. “The church (that sold the property) had a baptismal pool inside that we plan to move out.”

Despite its current state, Hild said, the building is in surprisingly good shape.

“The building is water-tight and the roof is in fantastic condition,” he said. “It’s definitely a great building that deserves to be preserved.”

No plans have been filed with the city to redevelop the property.

With Manchester experiencing a growth spurt, Hild said, investment flowing south into Swansboro and around the Woodland Heights neighborhoods is natural.

“By redeveloping this building, we hope this will help provide a catalyst for more investment and growth in this area,” Hild said. “It’s about time.”

Siegel said he’s glad the property has a shot at redevelopment.

“I’m no developer, but it would be nice to see the building maintained as a grocery store, since there are none in the (Manchester area),” Siegel said. “The property is large enough to where it could accommodate a mixed-use development with retail and some multifamily housing.”

And they will be announcing a brewery in that spot in 3….2…1.

Anything put up in that spot has to be an improvement.

I would love to see this building saved!

This building may have a Hull Street address but it is set back behind a vast sea of asphalt parking and is oriented towards W 20th Street. I hope whatever plans the Hilds have ideally involve redeveloping some of that parking lot to put buildings along the Hull Street frontage. Hull Street needs as much continuity of buildings and pedestrian activity as possible to achieve its full potential.

Very interesting purchase as no historic district so no tax credits and you are on the fringe. It is a cool building. It would be awesome to see Aldi or Lidl do an adaptive reuse.

[…] to launch their efforts in the neighborhood. Through their Church Hill Ventures, the Hilds have acquired nearly 30 properties in and around Manchester – a list of holdings that’s growing nearly every […]