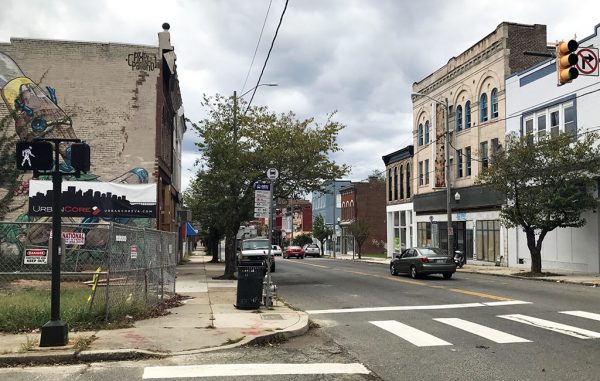 After several years of quietly amassing properties along a rundown stretch of Hull Street, Michael Hild and wife Laura Dyer Hild are ready to put their big bet on Manchester to the test.

Work is underway to redevelop and open a donut shop, brewpub and market/restaurant at 1204, 1209 and 1213 Hull St., three buildings that will serve as a sort of anchor for the couple’s efforts to revive a chunk of the neighborhood through a portfolio that now totals two dozen properties on surrounding blocks.

“It’s time to bring this area back,” said Michael Hild, who is also CEO at Live Well Financial, a mortgage finance company he launched in 2005, and co-owner with his wife of Anderson’s Neck Oyster Co. “When you look at the activity that is occurring in the neighborhood, this is the fitting addition, that quite frankly, has been a long time coming.”

At 1209 Hull St., the Hilds are gutting the three-story building to transform it into a yet unnamed brewery and restaurant. The top floors of the property, which formerly housed Baldwin Dry Goods and later a Thalhimer’s department store, will hold twelve one-bedroom apartments. Plans also call for the roof to be converted into a deck as an amenity to the brewpub.

Hild said he is targeting a first quarter 2018 completion for the apartments and the commercial shell.

Next door at 1213 Hull St., the Hilds are developing Hot Diggity Donuts, a shop that will take over the ground floor underneath four new one-bedroom apartments on the second floor.

Looking to entice area residents and commuter traffic along the Hull Street corridor, Hild said, Hot Diggity will serve hot, made-to-order sourdough donuts and coffee. It also will look to be an after-hours dessert location with beer, wine and liquor to go with the donuts.

Across the street at 1204 Hull St., the Hilds’ are planning to debut the Butterbean Market and Café in the first quarter 2018.

A play on the East End’s Union Hill Market, Butterbean looks to become Manchester’s neighborhood “groceraunt,” as Hild called it, with a grocery store and restaurant under one roof.

With the help of executive chef Daniel Scherotter, who also will oversee hiring and menu development at Hot Diggity Donuts, Butterbean will offer sandwiches, salads and soups for dine-in or carryout. The café portion also will sell beer and wine on tap, along with coffee and kombucha.

“Having a neighborhood market and café is very important to the health and growth of Manchester,” Hild said. “Butterbean is the first attempt at making the neighborhood livable.”

UrbanCore is the general contractor on all three buildings and Joseph F. Yates Architects designed each project. Campfire and & Co. is handling interior design and branding for Hot Diggity and Butterbean.

The Hilds have made their moves in Manchester through their Church Hill Ventures LLC, now one of the neighborhood’s biggest property owners. Over the last few years, they’ve spent a total of $3.8 million to acquire 24 properties, mostly along Hull Street, according to city records.

For their first wave of development, the Hilds are putting their money where their mouth is – funding 100 percent of the construction costs for the structures, while also creating and owning the businesses that will fill them.

“It took a lot of time to research the properties in the area, but we had a feeling the area’s growth would continue,” Hild said.

Hild would not disclose the amount of investment for the three projects.

“These are all concepts that have taken years to create,” he said. “A lot has gone into these ventures … we really wanted to find concepts that would be received well by people that live in the area.”

The Hilds continue a steady stream of investors to place a bet on Manchester, where residential development is surging and outpacing Shockoe Bottom, Carytown and Church Hill in new-unit growth.

Fountainhead Properties is readying 1.2 acres at its New Manchester Flats property at 915 E. Fourth St. to accommodate 104 low-income apartments. The group also plans to construct a pair of 16-story towers on a quasi-island just west of the Mayo Bridge.

Retail and restaurants are finally starting to arrive as well.

Pig and Brew, a new venture co-owned by Lamont Hawkins, the owner and pit master of Inner City Blues Carolina BBQ, is set to open at 1313 Hull St.

Café Zata, which has one coffee shop in Forest Hill, is preparing to open its second location in the former Blanchard’s Coffee Roasting facility at 700 Bainbridge St.

“Manchester is here and now,” Hild said. “This is not idle talk, this is actually happening, and Manchester is leading the way.”

Wish them the best of luck. This area has been overlooked for a while and this is just the jump start needed.

Doughnuts an beer are the recipe to Richmond success, what a great time to be living in such a great city,

It is tremendous to see these old buildings coming back to life, bringing new businesses with them.

The Hilds have been excellent additions to Manchester’s growing residential and business scene. Its really cool when the developers have so much faith in an area that they move there themselves, as well as make contributions to improve properties that they do not own personally. Robin Miller may have been first, but Jeremy Connell, Sam McDonald, John Gregory, Charlie Westbrook and the Hilds have shown that this neighborhood is turning for the better on a daily basis. ( I’ve probably left someone out!) I was walking up Porter Street the other day and its as though I was on Hanover… Read more »

[…] their collection of real estate nearby. Their holdings include three buildings a few blocks north being converted into a donut shop, brewpub and […]

[…] St., a long-vacant three-story building that once housed a Thalhimer’s department store and is being redeveloped as a brewpub and apartments at the hands of Michael Hild and Laura […]

[…] Hull St., a long-vacant three-story building that once housed a Thalhimers department store and is being redeveloped as a brewpub and apartments at the hands of Michael Hild and Laura […]

[…] Richmond BizSense has been busy detailing all the work being done along Manchester’s Hull Street corridor. The coverage of Hot Diggity Donuts, the Butterbean, and a new brewpub at The Baldwin Building was featured in an in depth article: Brewpub, donut shop, market to anchor couple’s growing Manchester gamble. […]

[…] It’s one of the only bank branches in the neighborhood and is housed in a 90-year-old building along a stretch of Old Town Manchester that’s garnering renewed interest. […]