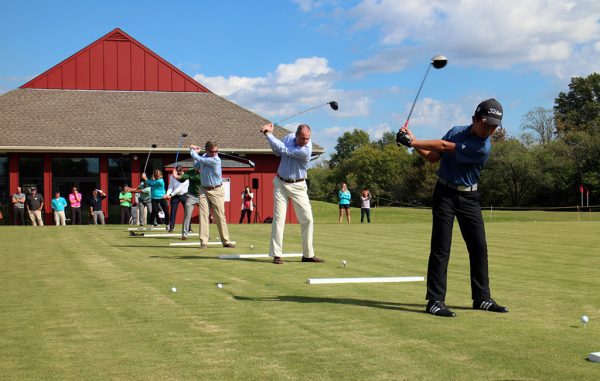 Setting aside the usual ribbon-cutting accessory oversized scissors, a local nonprofit unveiled its newly renovated facility in the city with a tool more fitting for the occasion – golf clubs.

First Tee of Greater Richmond, a nonprofit that uses golf as a means for youth outreach, on Saturday will open to the public its newly upgraded facility at 400 School St.

On Wednesday it celebrated the culmination of $1.2 million in upgrades to the six-hole course, its clubhouse and driving range with a ceremonial “first drive.”

“We don’t cut ribbons here, we hit golf balls,” Mike Walton, chairman of the nonprofit’s board of directors said to the crowd, which in addition to businesspeople, politicians and academia, included dozens of children from Richmond Public Schools.

The Northside facility, built on part of an old landfill, has been closed for renovations, which began in summer 2016 with work on the course and included clearing brush and some trees, re-sodding the fairways, fixing bunkers and converting the greens to Champion Bermuda grass. That makes the city course one of the few local courses to use Champion Bermuda greens. Golf course architect Lester George created the initial design for the site.

Installation of nearly $600,000 of new turf was completed earlier this summer. The bulk of that was funded by VCU Athletics, which is using First Tee for its golf team’s short-game practice facility. 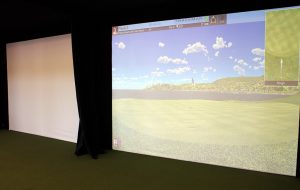 Renovations on the clubhouse included gutting and reshaping the interior of the building to make room for two golf simulators, after-school space for kids and a small retail shop. Hourigan Construction did the structural work and Flourish Spaces designed the interior. The clubhouse portion of the project is funded entirely by First Tee donors.

First Tee of Greater Richmond expects to serve 70,000 kids this year. It offers life-skills experience programs, with golf as a part of the curriculum, and also brings other nonprofits to its facilities, such as the Boys and Girls Club.

And it’s implanted golf as part of the physical education curriculum at dozens of elementary schools around the region.

The nonprofit operates with a $2.5 million annual budget. About 25 percent of that is derived from revenue at its two courses – the other being an 18-hole course in Chesterfield, at 6736 Huntingcreek Drive.

First Tee sees the new city facility as a new revenue driver, with the hope of drawing downtown workers and nearby residents to get in a quick round, or even hit a bucket of balls on their lunch breaks.