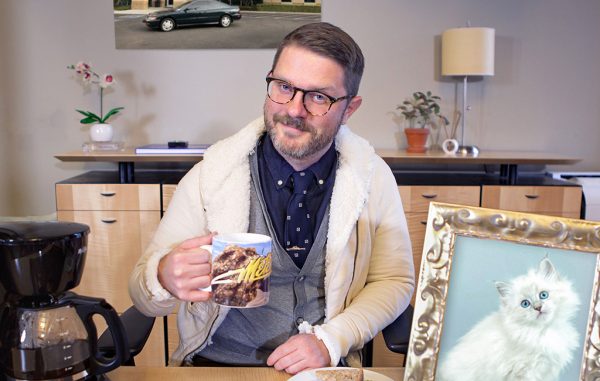 McKinney creative director and Brandcenter alum David Sloan with items from the video that were requested with CarMax’s offer. (CarMax)

Making good on a tongue-in-cheek offer – and cashing in on an unusual marketing opportunity – Richmond’s resident used-car retail giant has paid $20,000 for a 20-year-old car offered for sale in a parody ad that went viral on YouTube.

In a Twitter post Wednesday, CarMax thanked California-based writer-director Max Lanman, who created a phony ad for his girlfriend Carrie’s 1996 Honda Accord, for the car and other items the company received in exchange for the $20,000 offer it made in its own video response.

A photo posted with the tweet shows David Sloan, a creative director with CarMax’s ad agency McKinney and an alum of the VCU Brandcenter, with items from the video that were requested with the offer: Carrie’s passenger-seat coffeemaker, a Mexico-themed coffee mug, her jacket, a half-eaten sandwich, rear-window rubber duckies and a picture of the cat that rode shotgun in the ad.

.@MaxLanman thanks to you, we picked up a glorious mid-90s, mid-sized sedan + some pretty cool stuff. Next time you’re selling a car, take the easy route and come to us first. And since you’re keeping the cat, we donated $5,000 to @KittenRescue. pic.twitter.com/Pgl1RbH8qV

The fervor that followed the ad resulted in an eBay auction that was cancelled after it reached $150,000, according to Lanman’s YouTube page. It also prompted the response video from CarMax, which offered to buy the car, the cat, the coffeemaker, the coffee mug, the jacket and whatever was left of the sandwich for a combined $20,000, redeemable for seven days at any CarMax location.

Listing the offers more so like a set of demands, Sloan adds: “The Mexico mug is non-negotiable. The cat’s optional.”

“Believe me when I tell you that your commercial has made a 1996 Honda Accord-sized hole in our heart, and we will not rest until we’ve filled it,” Sloan says in the video. “At CarMax, we buy all the cars – and sometimes, the jackets and the sandwiches too.”

In a post on his YouTube page, Lanman announced that he and Carrie had accepted CarMax’s offer and sold Greenie.

“After receiving Carmax’s hilarious-but-real offer to buy the car for $20,000, Carrie accepted and we sold them the car,” the post said.

On Thursday, Laura Donahue, vice president of marketing services at CarMax, said the price tag for the car – and the effort put into the response video – was worth the exposure.

“We saw Max’s video, thought it was awesome and creative, and wanted to be part of the fun,” Donahue said in an email.

“We’ve watched Max’s ad no less than three dozen times, and it never gets old. To join in the fun Max started, we knew we needed to offer something special to get his attention.

“However,” Donahue added, “no one should have to work as hard as Max did to sell a car! That’s why we make it easy at CarMax and will buy all the cars.”

CarMax’s tweet adds that since the couple is keeping the cat, the company donated the $5,000 it offered for the feline to Kitten Rescue, a Los Angeles-based nonprofit.

Richmond’s mark on the videos wasn’t only made by CarMax. In addition to Sloan, the response video was conceived by fellow Brandcenter alums and McKinney creative directors Lyle Yeman and Will Dean. Another Brandcenter alum, CJ Franzitta, also was involved as strategy director on the CarMax account, according to the Brandcenter.