Carvana and CarMax are competing for used-car customers with new ad campaigns.

As used-car retailer Carvana makes a push into the local home turf of industry leader CarMax, the two companies are taking to the airwaves to distinguish themselves to consumers, with notably different ad campaigns.

Last week, BizSense broke the news that the fast-growing, 3-year-old Carvana is planning a 6½-story “car vending machine” tower in Short Pump, that if approved would be a visible flag-planting within a mile of CarMax’s original location and three miles of its corporate headquarters in Goochland County.

The companies’ campaigns started airing in the Richmond market in late June, when Carvana, which offers online car buying without involving a physical dealership, announced its expansion into Central Virginia as its 14th market.

A week earlier, CarMax set up its new digital and technological innovation center downtown, emphasizing its focus on building e-commerce technologies. While the company offers online shopping, it requires customers to complete purchases and financing at a retail location.

Carvana’s TV spot, which it premiered during the Super Bowl, features a kimono-clad customer celebrating his online car purchase with flashy dance numbers, kinetic visuals and a song that gets stuck in your head with its auto-tuned refrain: “That didn’t suck. In fact, I liked it.”

CarMax’s campaign – a series of single-shot spots featuring comedian Andy Daly – takes a considerably subtler tone with messages highlighting the company’s online services, such as reserving a car in advance of a visit, and telling customers they need not dread a visit to the lot.

In one spot, in which Daly is seen carving a wooden tiger with a chainsaw, he says he did so to show that, “…should you visit the lot, CarMax associates will not pounce like tigers, because people don’t like that.”

While the ads could appear to be countering each other’s messages – Carvana’s no-dealership-needed online car buying, versus CarMax’s brick-and-mortar-based, person-to-person experience – the creators behind both said they’re not responses to each other.

“Obviously we’re aware of Carvana and we’re aware of competitors in the marketplace, and we understand what they’re doing, but I can honestly say there was no discussion of, ‘Well, they’re saying this and now we’ve got to come back and say this.’ There really wasn’t,” Cude said. “It may have just been coincidence.”

Carvana co-founder Ryan Keeton said the same, calling the ads less of a response to each other than to a changing marketplace trending toward digital.

“I don’t believe it’s a response to anything aside from consumer preference,” Keeton said. “If you look at some of the spots and in general, they’re all trending more to doing things online, whether it’s utilizing the computer and doing things in advance of still going to the dealership – in general, the industry is moving in that direction. 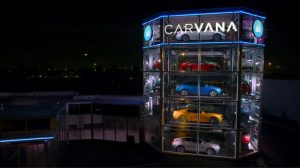 “I don’t think it’s a response to us or will ever be a response from us to them,” he said.

Neither company would disclose the costs of the campaigns, though Keeton noted a difference in that Carvana’s was produced in-house, avoiding costs involved with using an outside ad agency. Its spot was directed by Paul Keister, a former creative director with Crispin Porter + Bogusky who co-founded his own agency before joining Carvana last year as its chief creative officer.

Keister said the concept evolved from the common perception that car buying “sucks.”

“When you talk to anyone about their typical experience of buying a car, you get this look of pain washing over their face,” Keister said. “By and large, it should be the best purchase that you’re making. You’re buying this amazing car, but the process isn’t as amazing. It sucks, to be honest.

“Our customers that come to Carvana, after the process, they’re pleasantly surprised,” he said. “It’s not what they expected, and there are a lot of used auto sites that reflect that. So (the concept) came right out of that insight.”

The company worked with New York agency Horizon Media on local media buying. Keister said additional ads, both on TV and in other media, are in the works.

“TV’s part of the plan, but there are other opportunities out there that we can always take advantage of,” Keister said, adding: “Big, experiential ideas that hit customer touchpoints in every way and make their day a little better.”

The CarMax spots were filmed at the company’s retail location in Oxnard, California, where McKinney’s Cude said other CarMax ads have been filmed. Development started in late 2015, and filming got underway this spring.

The spots were directed by Shawn Levy, whose directorial credits include “Night at the Museum” and the current Netflix hit “Stranger Things.” Levy suggested Daly, known for his roles on HBO’s “Silicon Valley” and Comedy Central’s “Review,” for the spokesperson-style role, which Cude described as a departure from previous CarMax campaigns. 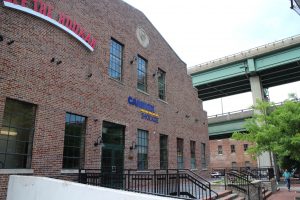 “We took multiple ideas, and one that we really liked was this idea of using a character or a spokesperson,” Cude said. “(Daly) is just a perfect representation and lined up really well with the CarMax brand. He has an endearing quality, an honest quality, but at the same time he’s funny and self-deprecating.”

In a statement, Jim Lyski, chief marketing officer for CarMax, said those attributes fall in line with the company’s culture.

“We want consumers to know that at CarMax, we put our customers at ease, do what’s right by them, and don’t take ourselves too seriously,” Lyski said, adding that the campaign aims to highlight the company’s customer service, both online and in-person.

Acknowledging the perception of car buying that likewise drove Carvana’s campaign, Cude said CarMax’s ads aim to connect with customers and break down barriers that may be keeping them from shopping for a car.

“The goal for the campaign is to help establish CarMax’s position in the marketplace as the used-car store with the highest level of integrity and customer service in the category – and obviously, help sell cars.”