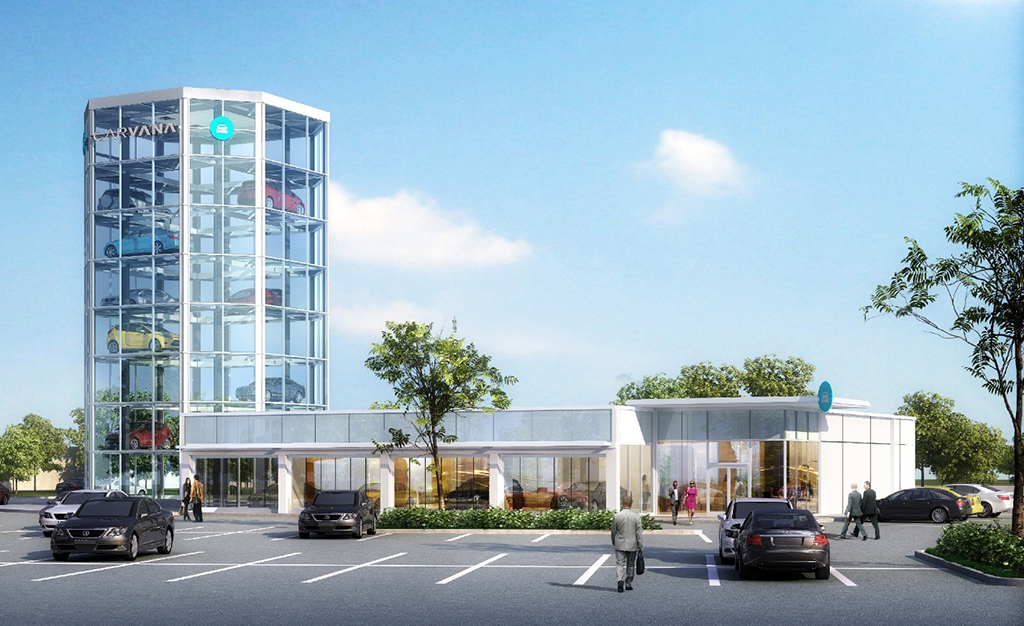 A rendering of the proposed site in Short Pump.

Two months after it started selling cars locally, a national used-car retailer is looking to make a towering impression on the Richmond auto market.

The 71-foot-tall tower, which would dispense cars to customers who have purchased them through the company’s website, would take shape on an undeveloped 1.3-acre portion of Tom Leonard’s Farmers Market’s 6.3-acre parcel at 4150 Tom Leonard Drive. The site is located alongside Interstate 64 – just up and across from the original location of locally based used-car sales industry leader CarMax.

Arizona-based Carvana, which entered the Richmond market in late June, is requesting a special-use permit and amendment to proffered conditions that currently prohibit auto sales on the site. The land is zoned for industrial use. The permit would allow for an exception to current height standards, allowing for a building height of up to 75 feet. 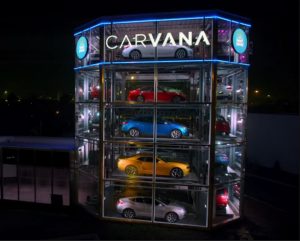 The vending machine tower, as shown in a video from Carvana.

The project would represent an initial investment of $6 million, including an initial capital expenditure of $4.5 million, according to documents filed last week by attorney Andrew Condlin of Rother Doner Jackson Gibbons Condlin, who is representing Carvana in the application process.

Noting the project’s smaller footprint, Condlin described it as unlike traditional auto dealerships, contending that its use should not be restricted by the property’s current proffered conditions that he said date back to the 1980s. Carvana touts the project as more environmentally friendly and less impactful than traditional dealerships, requiring less acreage, pavement and parking – 48 spaces in this case, according to the documents.

“While most traditional car dealers require 10 to 20 acres to house their showrooms and inventory, Carvana requires only 1 to 2 acres for their locations,” Condlin said in an email.

“This is such a unique use that is certainly not typical of car dealerships as we currently know them, and this area has changed significantly since 1986, that we believe this is an appropriate use for this area,” said Condlin, who is familiar with that stretch of Short Pump, recently securing a self-storage property for development two parcels up the road that had struggled for years to land a commercial user.

The 1.3-acre parcel, visible from the interstate, is at the easternmost part of the Tom Leonard’s property, which is partly undeveloped. According to Condlin’s filing, access to the parcel would be provided from Tom Leonard Drive through “an agreed-upon access easement with the adjoining parcel.”

Carvana co-founder Ryan Keeton declined to discuss specifics about the project, stating only that the company has an aggressive growth strategy and plans to build such facilities – called fulfillment and welcome centers – in “as many markets as possible over the next few years.”

The Short Pump facility would be similar to one the company constructed in Nashville, Tennessee. Four more vending machines are under construction in Texas, in Dallas, Houston and Austin.

When Carvana pulled into the Richmond market in June, it secured a distribution space at an undisclosed location in Petersburg. Cars purchased through the website are typically shipped to that site and delivered to customers at their homes, but customers who want to pick up their cars at a physical location would be able to do so at the Short Pump site.

Purchasers would be mailed a token that they would use to activate the vending machine, which would then automatically lower and present the purchased car.

The facilities’ lift systems are designed and manufactured by Otto Nussbaum GmbH & Co., a German supplier that manufactures them in Gastonia, North Carolina. The company also transports and installs them in the towers.

The buildings are being designed by Charlotte-based WHN+ Architects. The engineer on the project would be Warrenton-based Bohler Engineering.

The Short Pump location would employ 20 full-time workers who would be recruited locally and make an average annual salary of $45,000. It would operate daily from 9 a.m. to 7 p.m., and visits to the site would be by appointment only.

If approved, the project would be a bold statement for Carvana’s entry into Richmond, the hometown of CarMax. The site is within a mile of CarMax’s original location near Innsbrook and three miles from CarMax’s corporate headquarters in Goochland County.

Founded in 2013 in Phoenix, Carvana has since expanded to Texas, Alabama, Florida, Georgia and North Carolina. Richmond represents its 14th metro market and its first entry into Virginia.

The company reports current revenues in excess of $350 million. Last year, it ranked fifth on Forbes’ list of America’s Most Promising Companies.

In an interview last week, Keeton said the company has made strides in the Richmond marketplace since arriving here in June. While the private company does not release exact sales figures, Keeton noted that Carvana is currently the No. 2 late-model used-car retailer behind CarMax in Atlanta, where it started selling cars in 2013.

“We’ve been in that market for only three years, and we’re already right behind them at that level,” Keeton said. “Every market that we’ve entered after Atlanta is growing incrementally faster at that same moment in time than Atlanta did, and Richmond is on that same trajectory.”

Cool design and great to have such competition. Though, no doubt CarMax would prefer to not have them literally towering over their very nearby launch location. I am very surprised at the biz model though of the tower being used for pick-up of a vehicle ordered online using a coin that has to be mailed. I would think the beauty of the tower is to stock the 28ish most desired vehicles with the specs and colors that are the hottest selling. Then, folks browse the local tower online, buy a car, and get a code (or Apple Pay / Samsung… Read more »

Interesting and flashy. Is it anything more than a good way to burn through venture capital while making a lot of noise? Carmax was based around eliminating the hassle of buying a used car and haggling with the seller over price. I thought Carvana was unique with their offer of delivering the car directly to the buyer for a seven day test, eliminating the hassle of going to the car lot to test drive. So what problem does this solve? How is it better than home delivery? Why do they need a retail location at all? No affiliation, just an… Read more »