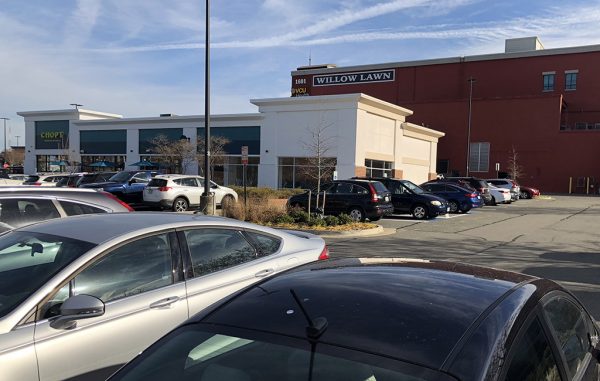 The surface lot to the right of Chopt is slated for a Starbucks. (J. Elias O’Neal)

A national coffee retailer is looking to expand in The Shops at Willow Lawn.

Starbucks filed plans last week with the Henrico County Planning Department to construct a new store next to the recently opened Chopt salad restaurant, near the Fitzhugh Avenue entrance to the retail center along Willow Lawn Drive.

Plans call for a 2,200-square-foot store to rise on an existing surface lot that will include a drive-thru and 16 new parking spaces, the plans show. The project calls for the vacant former AAA building to be demolished.

Starbucks already operates a 1,200-square-foot in-line location in Willow Lawn next to the Staples and Dairy Queen.

It’s unclear whether the existing location will remain open upon the completion of the outparcel site. Calls to Starbucks were not returned Tuesday. An email to Federal Realty, the firm that owns and manages Willow Lawn, was not returned in time for this story.

Starbucks’ expansion is the latest change at Willow Lawn.

Florida-based Tijuana Flats Tex-Mex is opening its first restaurant in the region in the former Qdoba space in the shopping center’s east end. Chopt, another fast-casual salad concept, opened in October.

Note: This story has been updated to include information received from Cara Dickens after deadline.

The Tijuana Flats location looks like nobody has touched it in 6 months.

According to a craigslist ad they posted they’re supposed to open in March.