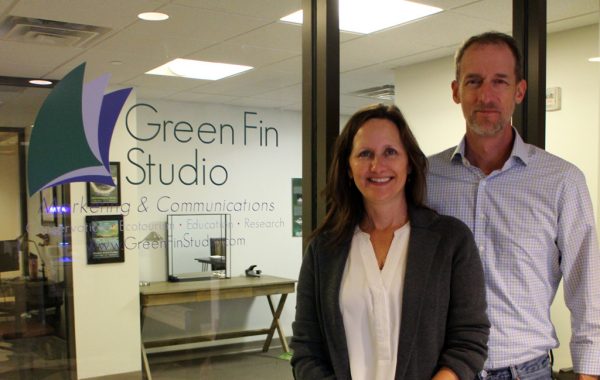 A recently renamed firm with an environmental focus is adding to Richmond’s marketing scene.

Green Fin Studio, formerly Chesapeake Environmental Communications, has relocated from Gloucester to downtown Richmond, where it opened an office in October in the ground floor of the Hotel John Marshall building.

The firm signed a two-year lease for the space, which shares the floor with John Marshall Barber Shop, Elevated Events of Virginia and a leasing office for the Residences at the John Marshall apartments.

Founded in 2010 by wife-and-husband team Paula and Dave Jasinski, Green Fin focuses on marketing services and interactive media specifically for clients in environmental fields. Its client roster includes The Nature Conservancy, Friends of the Rappahannock, Chesapeake Bay Program and VCU.

“Lots of our clients are here (in Richmond), and we’re constantly on the road to D.C., Annapolis or flying somewhere, so it just felt like more of a metropolitan fit for us,” Paula said of the move, which coincides with the switch to the firm’s new name.

“Chesapeake Environmental Communications was a nice descriptor when we first started, because we were doing things locally that were really science-based and Chesapeake Bay-focused, but we’ve grown with the marketing and communications past just the Chesapeake Bay,” she said.

With a staff of seven full- and part-time employees, the firm, which also works with a team of consultants, has a presence beyond its Richmond home base, with employees stationed in Matthews and in Easton, Maryland.

“It’s broadening the science to a larger audience and making it more understandable to them,” Dave added.

“We both have science backgrounds, and we both started our careers more in the hardcore nitty-gritty of interpreting data, interpreting information and communicating to other people who were inside that tent. What we’ve found is the part that we like the most is talking about the technical stuff to people who are outside the science tent – people who might not have a science background but are very interested in the topic,” Dave said.

The Jasinskis just returned from a trip to the Turks and Caicos islands, where they do communications and marketing for Ocean Club Resorts. A recent project included an informational brochure for guests about the islands’ reef ecosystem and wildlife.

Locally, in addition to VCU and The Nature Conservancy, they’ve done work with DEQ and developed a website for James River Watch. Paula said the firm is adding to its client roster beyond Richmond as well, with two clients recently signed in Costa Rica and work lined up with National Geographic.

A Maryland native, Dave worked for the University of Maryland through the Chesapeake Bay Program, among other bay-related work prior to launching Green Fin. Paula, a Northern Neck native and UVA grad with a master’s in marine science from William & Mary, had stints at NOAA, several nonprofits and worked with the EPA as a contractor prior to Green Fin.

The Jasinskis worked with Reilly Marchant with Cushman & Wakefield | Thalhimer to secure the lease for their downtown space, which Paula said they expect to outgrow. She said they’re looking to purchase larger space in the city and are in talks with Divaris Real Estate to help with their search.

[…] week we’re thankful for Richmond BizSense’s coverage of our business. It’s been wonderful to meet new businesses and potential […]