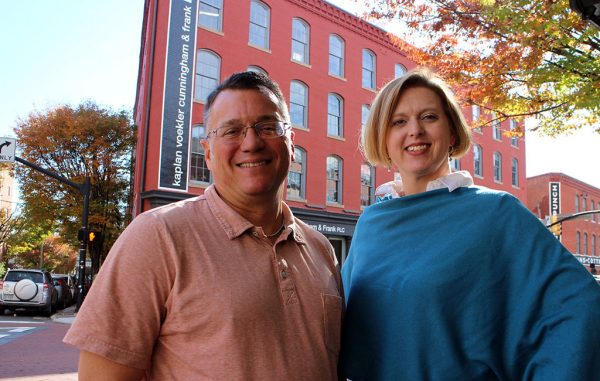 A recent addition to Richmond’s creative community is looking to make a spark in the local branding and marketing scene.

North Carolina-based Wildfire has set up shop at 1401 E. Cary St., the company’s first expansion outside Winston-Salem, where it has been based since starting in 2002.

The firm is sharing space with market research firm Feedback on the top floor of the Kaplan Voekler Cunningham & Frank building in Shockoe Slip.

Co-owner Brad Bennett, who founded Wildfire with fellow Mullen agency vet Mike Grice, said the firm has had feet on the ground locally for a year and a half, researching the market before committing to an office.

Three of the company’s 32 employees, two of whom Bennett said had asked to be based in Richmond, were at the Scott’s Addition Gather building before moving to Feedback in September. Helping the company establish its presence in Richmond is recent hire Jennifer Barbin, whose 15 years of sales and marketing in Richmond has included stints at NBC12 and most recently Randall Branding Agency.

Bennett said his employees’ desire to reside in Richmond and the market’s similarities to their hometown helped motivate the move.

“To me, Richmond is like Winston-Salem’s big sister – very similar in its heritage: tobacco, financial services, healthcare, rebirth, all that’s going on in redevelopment, and we have a big startup ecosystem,” Bennett said. “As we looked around and wanted to spread our wings a little bit, Richmond seemed to make sense.”

Bennett said the name “Wildfire” was picked as an allusion to spreading news and sparking action.

Wildfire’s creative approach involves similar names to describe its different stages: “firing up” a project; “adding fuel,” or researching; finding “fusion” with the client and brand positioning; “hothousing” an idea; and “ignition” – a project’s execution in the marketplace.

While the company has yet to secure a local client, as its Richmond team has been focused on researching and assisting with work for the firm’s other clients, Bennett said they are pursuing five prospects in the market that have come onto the firm’s radar in recent weeks.

Bennett said the firm wouldn’t seek to swoop in on other agencies’ client work or relationships.

“We have an unspoken gentlemen’s agreement, which will apply in Richmond as well, that other agencies’ client rosters are not prospect pools for us,” he said. “If someone’s not happy and they raise their hand and call us, we’ll take the call, but we don’t in Winston, and we won’t in Richmond, target companies from other agencies as our own.”

Bennett recognizes that his firm enters a competitive territory in Richmond.

“No community, let’s be honest, needs another ad agency,” he said. “But if there’s one that can provide something that’s uniquely different … we think we can.”

This is great, always happy to see more branding resources in Richmond!

Welcome to #RVA and smart to snag Jennifer Barbin! She’s a firestarter, for sure! 😉

Congrats to Jennifer Barbin on her new role and to Wildfire for snagging a great resource.

The Pitch: Advertising and marketing news for 11.28.17 - Richmond BizSense

[…] Creative has established a local office at 1401 E. Cary St., where it shares space with Feedback. The office is the agency’s first […]

Congratulations! So happy for the company’s growth and commitment to spreading it’s wings like a Phoenix!