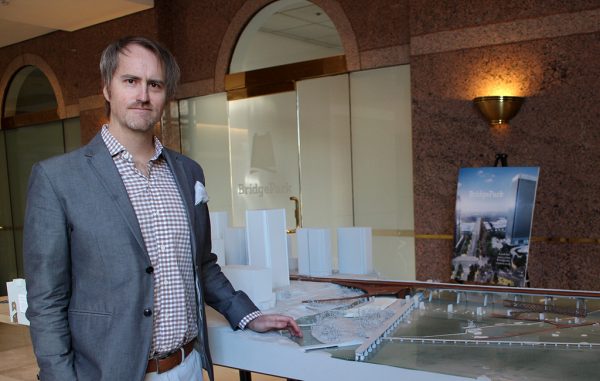 Ted Elmore next to a model of the project at BridgePark’s office in Riverfront Plaza. (Jonathan Spiers)

With a second round of fundraising, an effort to give Richmond its own version of the High Line is moving forward with help from the same engineering firm that worked on the New York City greenway.

Richmond BridgePark Foundation, the group behind a proposed linear park in the vicinity of the Manchester Bridge, is launching its next phase of research and planning and has enlisted the services of BuroHappold, the UK-based firm that served as structural engineer on the High Line – an elevated rail line converted into a walking trail and park in Manhattan.

The foundation has opened an office at Riverfront Plaza, on the ground floor of West Tower at the foot of the bridge, and is working with BuroHappold and Richmond-based architect Spatial Affairs Bureau on updated options for the project, said BridgePark president Ted Elmore.

“Having the opportunity to hire a couple of consultants to begin this next round of work is big,” said Elmore, a former partner at Hunton & Williams who left the law firm to focus on BridgePark full time.

“We’re a nonprofit, and we’re doing all this so far with just support from the community,” he said. “As we develop the story, the city will presumably get more involved. So far this has all been done privately by people who are excited about the idea.”

First proposed in 2012, BridgePark remains in the conceptual stage but has included such ideas as repurposing part of the Manchester Bridge as a greenway and street-level pedestrian crossing connecting downtown and Manchester. The project also could include connections to the nearby Potterfield Bridge, a river-level pedestrian bridge that opened in late 2016.

Elmore said the two consultants will work on developing more concrete ideas, with a focus on what’s possible structurally and how the project would fit within the city’s street grid. A scale model outside BridgePark’s office is being updated to show the full scope of the project and how it could relate to areas from Hull Street to north of the Coliseum. 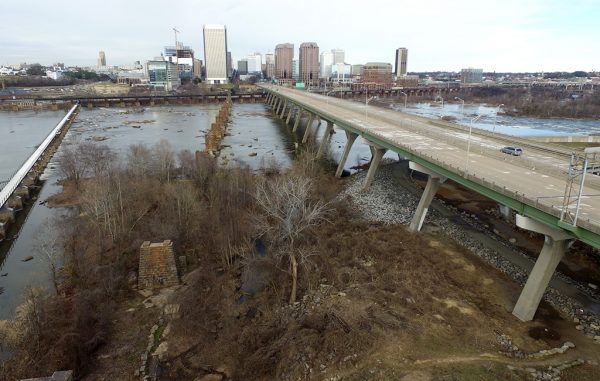 BridgePark would add a linear park with potential river connections along part of the Manchester Bridge. (Kieran McQuilkin)

Spatial Affairs Bureau, led by architect Peter Culley, worked on an initial conceptual phase with Richmond-based engineering firm Timmons Group. With BuroHappold on board for this next phase, Elmore said the project can progress to the next level, though he noted it remains years in the making.

“It’s going to take a long time, and we’ve got a long way to go with approvals from the city and state and funding from whomever is available to fund it,” he said.

Elmore said it’s too early to estimate a cost or timeframe for the project, which has yet to be finalized. He would not say how much the two firms are being paid or how much has been raised in this fundraising round, which is ongoing.

The idea for BridgePark was conceived by the late Ella Kelley and Mike Hughes, both of whom died in 2013. Hughes was the creative leader and president of The Martin Agency, and Kelley was a former ad exec and wife of Bruce Kelley, vice chairman at Martin before he retired in 2014.

After 15 years at Hunton & Williams, Elmore was hired by the BridgePark board to serve as president and executive director. He is the nonprofit’s sole staff member.

Elmore said they aim to complete this latest planning phase by the end of this quarter, after which results will be presented to the public. He said the phase will include engagement with the community and getting feedback on the concepts.

“We know it can create a tremendous impact for the city,” he said. “And we believe that it can and should be done.”

Please consider adding a bike lane to this bridge.

Imagine taking half of this underutilized bridge (four or five lanes in each direction?!) and turning it into greenspace, over the river. An elevated park with walkways, benches, plantings…such a great idea! While we’re at it, the city could look into re-designing the entire 9th Street entrance from the south, where pedestrians risk their lives trying to cross four lanes of cars and trucks flying into the city.

I don’t understand. The bridge is still in use?

What about the 14th Street Bridge that crosses Mayo island? That would seem a more logical location for an elevated park. Patterned after the Pont Nuef in Paris, it connects downtown with a dense neighborhood in Manchester, vs. the sparse mix of commercial, institutional and residential properties on the other side of the Manchester Bridge. And the 14th Street Bridge replacement is already in discussion, meaning there will be federal highway dollars coming at some point. Why not piggyback on that? Plus, the 14th Street Bridge intersects Mayo Island, destined to become Richmond’s “central riverfront park” in the master plan.… Read more »