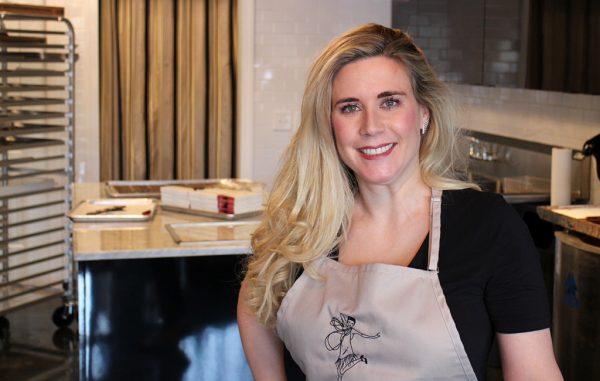 Capping a journey that brought her from Wall Street to the West End, Jessica Leonard is hoping to take a bite out of the sweets market with a hybrid chocolate bar/box of chocolates.

Originally from Northern Virginia, she spent 10 years in New York City working for Citigroup before realizing she wanted something more.

“I was eating a lot in New York and I was missing having my hands in the kitchen,” Leonard said. “I’d had enough.”

That led her to Richmond four years ago, where she went to culinary school Culinard, followed by a stint prepping meals in the Virginia Governor’s Mansion. As she learned more about chocolate, she had the idea for what’s now Miss Maude’s main product.

“I was buying all these chocolate bars, and I was thinking, ‘why isn’t there one chocolate bar with more than one flavor?’” she said. “And I was like, ta-da! That’s it, that’s what I’m doing.”

Miss Maude’s makes an eight-square chocolate bar, each block a flavor from a different region of the world. They include Italian hazelnut praline, French champagne, Peruvian pink salt and Southern crispy ride.

Leonard, who makes the bars from scratch at the shop, said she believes she’s the only chocolatier making that type of bar. 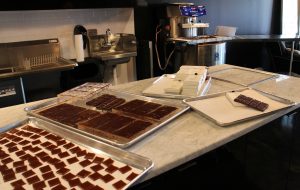 “The idea was like it’s a box of chocolates, but in a bar. You shouldn’t have to choose; you should be able to have all the flavors you want in one chocolate bar,” she said.

The name and theme of the shop is rooted in Leonard’s love of the Roaring ’20s.

“I like to think Miss Maude is my spirit animal,” she joked. “When I came up with the ‘Why Choose,’ it was based on the bon vivant lifestyle of having it all. That seemed decadent.”

The 60 percent dark chocolate bars retails for $14. Miss Maude’s sells online and in-store, and Leonard said it has distribution deals to markets and restaurants in Philadelphia and D.C.

She said she eventually wants to expand with other flavors while sticking to the same concept.

She joins other local chocolatiers including For the Love of Chocolate in Carytown, Gearharts Fine Chocolates near Libbie and Grove, and Chocolates by Kelly in Jackson Ward.

The shop is hosting a grand opening party Feb. 9.

Ms. Leonard asked, “Why there isn’t one chocolate bar with more than one flavor?”
There is.
It’s called Sky Bar–made by Necco for years and one of my favorites since the ’60s!
Link is http://www.necco.com/candy/Sky-Bar.aspx
Unlike the “Why Choose” candy bar, the Sky Bar doesn’t cost $14 for 3 ounces.

I’m a fan of Lake Champlain Chocolates, so obviously I and others will pay more for chocolate candy.
Could she concoct a bar covered with the white chocolate, too?
I wish her well!