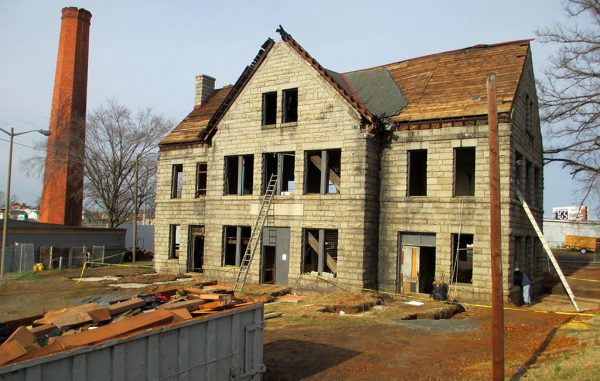 VUU’s Industrial Hall is being converted into an art gallery. (Jonathan Spiers)

Drivers on the interstate passing Virginia Union University may notice some activity at one of the campus’s oldest and more visible buildings.

They’re bearing witness to the start of a two-phase project to restore the university’s Industrial Hall building, a century-old, sagging stone structure, into an art gallery and museum for VUU.

“We’re excited about it,” facilities director David Gordon said. “We know the location of the building does garner attention from passersby, so we know people are curious about what’s going on.”

The school is working with Taylor & Parrish Construction on the first phase of the project to stabilize and shore up the building. Gordon said the building has structural damage from years of non-use and exposure to the elements.

Once stabilized, a second phase would transform the building into a modern space to house VUU’s art collection and exhibits currently displayed at its library. Local architecture firm BCWH has been enlisted to design the space, which Gordon said would allow more room for the collection and displays.

“While the designs are being completed, we wanted to stabilize the structure so we didn’t have any further deterioration before the renovation,” Gordon said.

Built in 1899, Industrial Hall is one of the school’s original eight buildings, which included an adjacent power plant, the smokestack of which still stands next door. The 7,000-square-foot building has housed classrooms over the years and served as a library and gym.

Work has included removing and storing the building’s slate shingles, which Gordon said have weighted down the structure over time. Other building materials also are being salvaged for use in the renovation, he said.

“We are planning to pursue historic tax credits in the renovation, so we are making sure what we do now in the stabilization process, we’re keeping that in mind,” he said.

Gordon said steel fabrication work would start in about two weeks. The roof will then be removed and replaced, further stabilizing the structure, he said.

He said the overall project cost and budget are dependent on designs, which remain in the works. He put the value of Taylor & Parrish’s contract for the phase-one work at between $350,000 and $400,000.

Gordon said the university’s Office of Institutional Achievement is fundraising for the project, soliciting donations from supporters and the museum community. A timeline for the project is undetermined.

The project isn’t the only sign of change along that stretch of Interstate 64-95. A mile to the east, a redevelopment of the St. Luke Building that once housed Maggie Walker’s bank is underway. Built around the same time as VUU and Industrial Hall, the building at 900 St. James St. is slated for a mixed-use conversion to apartments and medical office space.

Across the interstate, work is wrapping up on another university art gallery: VCU’s Institute for Contemporary Art, scheduled to open in April.

This is really great news! I have for years hoped the Industrial Hall building would be saved. Best of luck to VUU as they preserve, restore and resurrect the facility.

Kudos to VUU for making an effort to rescue a valuable component to their rich History. Especially in context of the conversations going on all around us about Richmond’s past, VUU’s story is truly remarkable and worthy of much attention. The essential work they continue to do educating our young people is key. We should all get to know the school and support them.