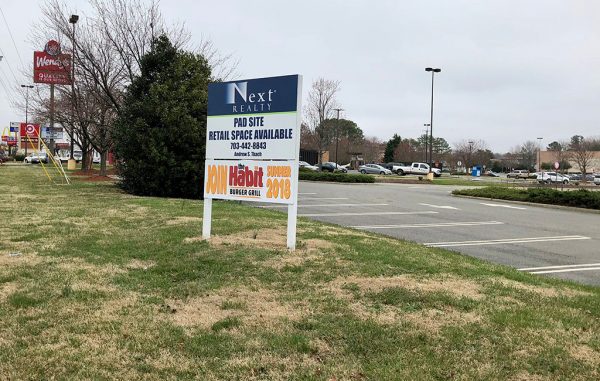 Tijuana Flats and Habit Burger Grill will be tenants in a proposed retail center at 11309 Midlothian Turnpike. (J. Elias O’Neal)

With their first Richmond-area locations already in the works, a pair of national chain restaurants is biting into Midlothian.

Tijuana Flats and Habit Burger Grill are planning to fill a proposed 5,700-square-foot shopping center at 11309 Midlothian Turnpike in Midlothian, according to plans filed with Chesterfield County.

The new retail center will be constructed between Wendy’s and Pier One Imports on a 1.7-acre parking lot outparcel owned by Target, which has a store next door.

Florida-based Interface Properties, a retail development firm with holdings across the Southeast, is building the proposed strip center.

Tijuana Flats would take about 2,800 square feet, plans show, while Habit Burger would take the remaining space that includes a drive-thru.

The project is awaiting approval from the county.

A sign advertising the site by Arlington-based Next Realty announced Habit Burger would open during the summer.

Lindsey Barden, a broker/owner of Dark Horse Commercial Real Estate, handled the Tijuana Flats lease. Barden has been retained by the Tex-Mex chain to grow its base in metro Richmond.

The Midlothian location will be Tijuana Flats’ third in the area, adding to locations in the works at Willow Lawn and West Broad Marketplace in Short Pump. It also operates a restaurant in Virginia Beach and 120 others across Florida, Georgia and the Carolinas.

Habit Burger, which operates nearly 200 locations, mostly in California, also is planning a spot in West Broad Marketplace, its first in the Richmond area.

Infill development has fueled some of the recent growth in Chesterfield County, particularly along Midlothian Turnpike and Huguenot Road.

Plans have been filed to construct a seven-unit, 8,400-square-foot retail strip on an outparcel fronting Midlothian Turnpike in the Kroger-anchored Ivymont Square Shopping Center in Midlothian.

Valvoline Instant Oil Change, which was constructed on a former gas station pad at the corner of Branchway Road and Midlothian Turnpike, is now open.

Cava Grill and Uptown Cheapskate are preparing to fill the remaining spaces in TownePlace at Huguenot, a small retail development at the corner of Huguenot Road and Koger Center Blvd. First Watch, a Florida-based breakfast-and-lunch restaurant, opened its first regional location in the shopping center last week.

Mission BBQ has submitted plans to build a new restaurant in the Wegmans-anchored Stonehenge Village shopping center at 12630 Stone Village Way, just off the turnpike, according to plans filed with Chesterfield County.