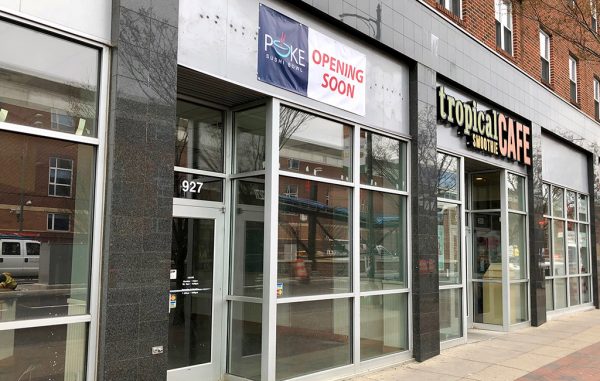 Poke Sushi Bowl will take over space in the Ramz Apartment on Broad building in VCU territory. (J. Elias O’Neal)

In the midst of opening a location in Short Pump, a Charlottesville-based restaurant group is coming back for seconds in the Richmond market, this time in VCU territory.

Poke Sushi Bowl, which makes customized bowls of chopped sushi mixed with rice and vegetables, soon will take over the former Jersey Mike’s Sub shop at 933 W. Broad St., on the ground level of the Ramz Apartments on Broad.

Phung Huynh and husband Bo Zhu are behind the regional chain, which opened its first location in the heart of Wahoo country in August 2016.

“We experienced a lot of success in Charlottesville near (UVA) and we wanted to be in an area that was accessible to students and people that live in the neighborhood,” Huynh said. “We felt this location was good for that.”

It marks the couple’s first foray into the city and its fourth location in Virginia, adding to two in Charlottesville and a recently opened shop in Fredericksburg. The group has plans for a fifth restaurant in Sterling.

The couple announced plans last fall to roll out its first metro Richmond location in the Downtown Short Pump retail center, in a 1,200-square-foot space that’s been vacated by Mathnasium Math Tutoring and Learning Center.

The Short Pump outpost is set to open in coming weeks; while its VCU spot is targeting a mid-spring debut.

“We’re still working on getting all the permits we need to open in Richmond,” Huynh said. “There isn’t a lot of construction that we need to do on the inside.”

The VCU Poke Sushi Bowl will seat about 30 patrons and hire 10 to 12 people to run the restaurant, she said.

A cuisine with Hawaiian origins, poke, which means “to cut or slice,” is traditionally a bowl of marinated, cubed ahi tuna mixed with rice and greens.

Patrons at Poke Sushi Bowl can customize bowls with meats that include ahi tuna, eel, crab meat, grilled chicken, tofu and shrimp, Huynh said. It will be served on top of mixed greens and rice.

Other mixable ingredients include quinoa, kale, seaweed, cucumbers, edamame and mango. The bowls are topped with house-made sauces such as a sweet/hot sauce, ginger wasabi and shoyu sauce.

“People are looking for good, healthy options and this trend delivers that,” Huynh said. “Our business in Charlottesville is growing, and we’re seeing more customers and returning customers as well. We think we’ll see that same customer growth in Richmond.”

Poke Sushi Bowl is the latest in string of new Asian concepts to come and go around VCU Territory.

Through various franchisees, BonChon operates three locations across the Richmond market in Henrico, Midlothian and Mechanicsville. The VCU location is the company’s fourth in the area and first in the city limits.

The Ramen Spot, which took over the former L’Apple Chinese Restaurant location at 948 W. Grace St., is now open. BB.Q Chicken, another Korean chicken chain and newcomer to the VCU food scene, has shuttered its operation at 900 W. Franklin St.

Ben Kwak, the franchise owner of the VCU BB.Q location, could not be reached for comment Tuesday.