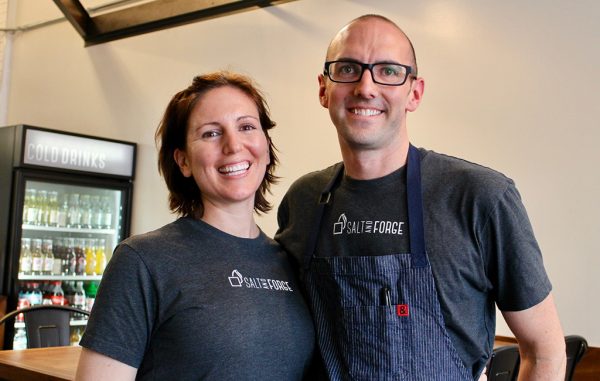 The newest addition to what’s become a restaurant row in Jackson Ward is up and running.

Salt & Forge, a 40-seat eatery on the ground level of a recently redeveloped building at 312 N. Second St., opened for business Monday morning.

Launched by David Hahn and fiancé Melissa Timberlake, Salt & Forge is a breakfast and lunch spot with menu items ranging from a house-made sausage, egg and cheese sandwich with house-made gravy over a buttermilk biscuit; to a chicken, bacon and ranch sandwich.

The restaurant also will offer a variety of salads, and will have a rotating beer and wine selection.

Salt & Forge looks to complete orders in 10 to 15 minutes, Hahn said. The restaurant also is available for catering.

“People need a quality breakfast and lunch option in the area, but they may not have the time to sit and wait for a meal like at a traditional restaurant,” Hahn said. “Here, they can order their food or coffee, take it with them or dine in … it’s about flexibility.”

For its chefs, Salt & Forge hired Adam Musselman and Kevin Kennedy, who along with Joshua Franklin also run the Cobra Burger pop-up. 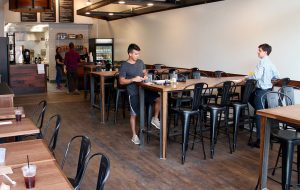 Idle Hands and Flour Garden have signed on to provide the breads for several of Salt & Forge’s sandwiches. Jess Widener, Four Forks pastry chef, will be selling her cookies and brownies there.

Since visiting the area in 2015 during the UCI Road World Championships, Hahn, a Colorado native, has made it his business to learn about area’s burgeoning restaurant scene. He ended an eight-year career with Chipotle as an operators and training manager to launch Salt & Forge.

Hahn purchased the Jackson Ward building for $260,000 in October 2016, renovating it to include two apartments above the restaurant.

Richmond-based Hunnicutt Construction completed the build out of the 1,700-square-foot space, while Island Architects completed the design.

Hahn would not disclose how much has been invested in the restaurant, and said the venture was financed by Chesapeake Bank and M&T Bank.