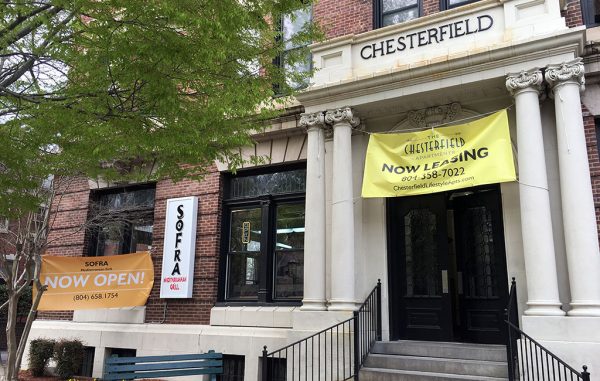 After a short stay by a Korean fried chicken chain, a VCU-area restaurant space has landed another tenant.

Sofra Mediterranean Grill opened last week at 900 W. Franklin St., in the ground level of the Chesterfield Apartments building. The storefront was most recently home to Bb.q Premium Chicken, which vacated earlier this year after less than 12 months.

Adnan Bajramaliu, an investor in Sofra, described the venture as a fast-casual restaurant that offers build-your-own gyros, grain bowls, sandwiches and salads.

“This is a quick healthy option for people in the area,” Bajramaliu said.

It’s Sofra’s first location in Richmond, and Bajramaliu said the concept is independent of an Orlando-based restaurant that shares its name.

“Depending on how it does here, we’d like to open a second location in the West End,” he said.

Bari Finani, who operated a similar restaurant in Roanoke, will serve as Sofra’s chef and Uran Zejanullahu will operate the restaurant.

The group has invested about $100,000 to renovate the 65-seat space, and has hired 11 people to staff the operation.

Sofra is open from 11 a.m. to 10 p.m. daily. The establishment also will cater and is looking to offer delivery options in the area.

The space has seen plenty of tenants come and go over the years. Prior to Bb.q, tenants included Shoryuken Ramen, Dash Kitchen + Carry and Cous Cous.