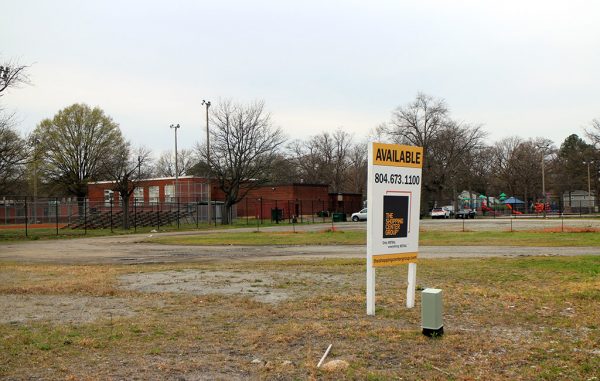 Developers are seeking a rezoning for 4910, 4920 and 4930 Forest Hill Ave. to construct a development anchored by a Veil taproom. (Mike Platania)

A team of seasoned developers is looking to go big along Forest Hill Avenue on the Southside.

A group led by Birck Turnbull and Charles Bice is seeking the rezoning of 4910, 4920 and 4930 Forest Hill Ave. to construct a three-story mixed-use building.

Plans call for up to 38 apartment units on two levels above 12,000 square feet of ground-level commercial space, according to a rezoning application filed with the city’s planning and development division.

One of the retail tenants to anchor the commercial space would be The Veil Brewing Co., as first reported by the Richmond Times-Dispatch. The Scott’s Addition-based brewery would add a tasting room to the proposed Southside development.

“We’ve been looking at the Southside for a while,” said Dustin Durrance, co-owner of The Veil. “Compared to other places, this is not an area that is very built up, so being a part of a project like this really appealed to us.”

With The Veil in place, Turnbull said the remaining spaces would be leased to other users such as a restaurant, a fitness studio and retail shops.

Bice said the group is under contract to acquire the property, which includes three parcels totaling 1.32 acres along Forest Hill Avenue in the Forest View neighborhood.

Pending rezoning approval, Bice said the group would purchase the property from Ashland-based SGGS LLC for an undisclosed amount.

The three parcels most recently were assessed for $586,000, according to city property records.

Ben Adamson, owner of Corinthian Construction, has been tapped as the general contractor of the project. Fultz & Singh Architects is designing the space.

Under the property’s existing B-2 zoning, the development team could build its project outright.

Mark Baker, owner of Baker Development Resources, which is handling the rezoning appeal with the city, said a change to urban business district zoning would allow the group to design and construct a mixed-use development encouraging pedestrian and bicycle users within the vicinity.

“It’s a matter of reconfiguration so this project can be a neighborhood amenity and asset,” Baker said.

The rezoning also would force parking behind the structure – pushing the development closer to the sidewalk along Forest Hill Avenue, much like the shops that line Libbie and Grove avenues in the West End.

“The B-2 designation simply is outdated for this area,” Baker said. “The current zoning requires a 25-foot setback with required parking in the front … something that you would see in a suburban strip mall. That no longer works for this neighborhood.”

Baker, a former planner with the city, said for years developers have eyed the Forest View parcels for development, but the B-2 zoning was a deterrent to jumpstart activity.

“It was always difficult to get it to work because of that 25-foot setback,” he said. “It was hard to get anyone to build on the site despite its location.”

The rezoning process likely will to take months to complete, Baker said, with the earliest approval from the city council possibly occurring in July.

During a community meeting Tuesday announcing the project to the Westover Hills Neighborhood Association, Travis Shaw, a neighborhood resident and member of the development team, said allowing the rezoning to move forward is important to accelerate new business growth in the area.

“My hope is for this to become an instant game changer,” Shaw said.

Forest Hill Avenue has garnered a rebirth of commercial activity in recent months.

Not too far from the pending project, Happy Empanada recently opened its first brick-and-mortar spot at 1203 Westover Hills Blvd. in the Forest View neighborhood.

Thirsty’s Bar & Grill, a New Orleans-inspired restaurant in the former Kinsfolk spot at 3514 Forest Hill Ave., has opened along the corridor.

Great to see fresh businesses open up on that corridor. It’s a beautiful area and lot of potential.