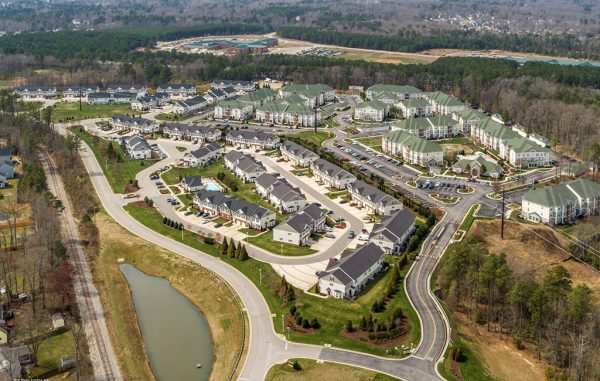 A massive apartment and townhome community in Chesterfield County has hit the market, 10 years after it was built as a part-condominium development.

The 38-acre property at Interstate 295 and East Hundred Road is listed through ARA Newmark, with agents Wink Ewing, Mike Marshall and Drew White handling the listing.

The listing does not include an asking price, which Ewing said would be discussed as interested parties make offers. He said they’ve secured confidentiality agreements from nearly 80 parties so far, and Ewing said he expects a sale price will be significant, due to the number of units involved and the condo-style townhomes.

“If and when it trades, it’ll be one of the biggest deals to ever trade in Richmond,” Ewing said, “dollar-wise and units, in terms of just one contiguous property.”

The listing is the first in the Richmond market for Boyd Homes, which developed Rivermont Crossing in the late 2000s as its first multifamily development in the area.

The company, which also builds single-family homes, has since added to its local multifamily presence with its 400-unit Element at Stonebridge apartments at the redeveloped former Cloverleaf Mall site.

Boyd president David Rudiger, a UR grad, said the time is right to test the market for Rivermont Crossing, which he said has served as the company’s flagship location for the Richmond area.

“Interest rates and cap rates being where they are, it’s the right time for us to consider selling,” Rudiger said. “If we don’t get an offer at the right price, it won’t sell, but I feel confident that we will.” 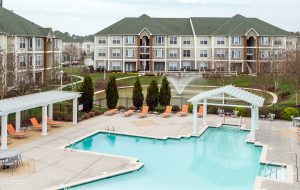 The property includes a pool and clubhouse. (ARA Newmark)

Rudiger said he did not recall the overall development cost for Rivermont Crossing. Boyd Homes paid $3.4 million in 2008 for the nearly 15-acre Rivermont Landing section, according to county property records, which do not list a sale price for the 23-acre apartments section.

A county assessment most recently valued the two properties at $28.6 million and $42.9 million, respectively, putting the total assessed value for Rivermont Crossing upwards of $71.5 million.

Rudiger said a particular selling point for the property is that the townhomes were built and intended to be sold as condos, until the company changed course and decided to market them as rentals.

“Because we designed that as a for-sale type of a product for people to own as individual owners, there’s not a whole lot that’s comparable to it in the Richmond market,” Rudiger said, adding that occupancy for the townhomes as well as the apartments have remained in the 90 percent range.

Ewing said the property helped lead and has since benefited from additional development in that area of Chesterfield, noting as examples the Amazon fulfillment center and Niagara Bottling facility in the nearby Meadowville Technology Park.

“People are seeing more demand in that market for apartments, and I think they (Boyd) finally have started hitting some rents and operational numbers that they’ve been trying to achieve for some time,” Ewing said. “When they were building down there initially, it was somewhat pioneering, so the timing for that particular submarket is very favorable.”

Ewing said the market for multifamily deals is hot in the Richmond area. Recent transactions have included the 159-unit Millspring Commons and 292-unit Village at the Arbors apartment complexes in Henrico that sold to out-of-town buyers for $20.6 million and $17.16 million, respectively.

Other big-dollar deals include the 366-unit Copper Spring apartments that sold to a D.C.-based buyer for $54.2 million. Last summer, the 340-unit Wellesley Terrace apartments near Short Pump sold to a local buyer for $51.12 million.

“There’s a ton of capital chasing these types of deals,” Ewing said. “Richmond’s got a really good spotlight on it right now in terms of population growth. A lot of investors are interested in buying here. I don’t think we have enough supply to meet that demand, so it’s creating a very favorable pricing environment for the seller.”

Ewing hits it on the head. Despite what appears to be an amazing number of new apartments coming on, the supply will still fall short of the demand. With construction costs forcing rents upward, the lure of existing product for investors is very strong. And everyone wants a piece of Richmond. The Region is seen as very sexy right now.