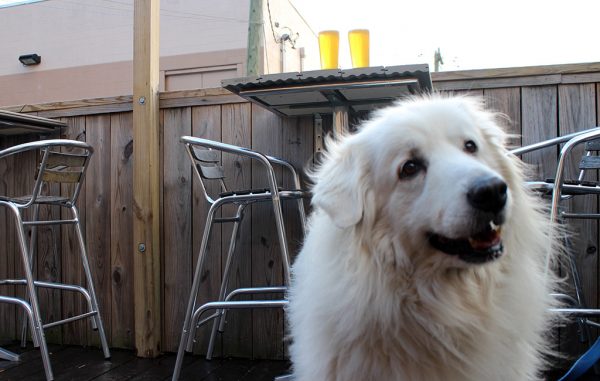 Beginning this summer, local breweries and wineries can save a seat for Spot at the bar.

Gov. Ralph Northam last week signed into law a bill that allows dogs inside the state’s breweries, wineries and distilleries.

While many booze-making venues already allow dogs on their outdoor gathering areas, the new law – which goes into effect July 1 – will change the current statute that only allows guide or guard animals indoors at such facilities, provided their presence is “unlikely to result in contamination.”

The bill passed through the General Assembly earlier this year and was patroned by Del. John J. Bell (D-Chantilly).

It does not require Virginia’s booze makers to allow dogs inside tasting rooms, but instead gives them the option to. The law also does not allow dogs to be in “any area used for the production of food products.”

The idea of allowing dogs inside has been met with mixed opinions from local brewers.

“Other than service dogs, we will not be allowing dogs inside, mainly for sanitation reasons, since our taprooms are so exposed to our production equipment,” said Eric McKay, co-founder of Hardywood Park Craft Brewery.

McKay noted Hardywood’s grounds are built to be dog-friendly with outdoor water bowls and waste pickup stations, and that its new Goochland location has walking trails where leashed dogs can get some exercise.

The legislation was supported by the Virginia Wine Association. Joe Dombroski, who owns New Kent Winery and serves on the VWA’s legislative committee, said he was glad to see the bill signed.

“The nice thing is it’s put the choice up to the winery owners and operators. It’s not from a regulatory perspective anymore,” Dombroski said.

Beyond dogs, Dombroski added that it may be in the wineries’, breweries’ and distilleries’ best interest to continue working together to push for looser regulations in the industry.

“There are times when issues are sometimes competing … but I think there’s common ground on many issues in craft beverage and wine industries where we’ve got to come together,” he said.