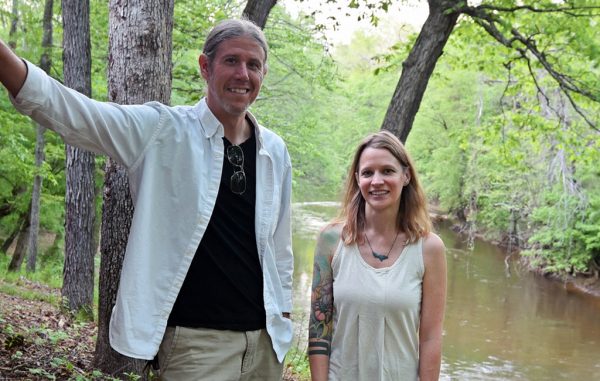 A pair of side-by-side Jackson Ward storefronts is hitting the auction block weeks after their lone commercial tenant packed its bags for Hanover County.

Print design firm BigTree has moved out of its space at 320 Brook Road, one of dozens of properties included in a public sale scheduled May 16, along with next-door property 318 Brook Road. SVN/Motleys is handling the auction.

The two-story Brook Road buildings, between Adams and Marshall streets, were acquired last June in a transaction valued at $500,000, according to city property records. The properties are owned by Baptiste Development LLC, an entity registered by Leon Baptiste, principal broker of Chesterfield-based Cr8tive Realty.

Attempts to reach Baptiste were unsuccessful Thursday. SVN/Motleys’ Richard Bryan said the company was approached about selling the properties on consignment.

Heather and Nate Simon, who operated BigTree in an 800-square-foot ground-floor studio at 320 Brook Road, said their lease was up and they’d been eyeing a move to a rural property surrounded by nature.

The couple found it in a 10-acre property north of Ashland that they’re purchasing with plans to make it their studio and personal residence. They did not yet want to publicly disclose the address but said the land is near the Ashland Mill, a 5-acre property along Route 1 that was put on the market in April.

Heather Simon said the property includes a cabin they’d like to turn into their office, with longer-term plans to build a studio and home. In the meantime, she said they’re working remotely and maintaining a residence in Jackson Ward. 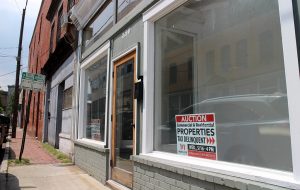 BigTree’s former storefront at 320 Brook Road, up for auction along with 318 Brook Road next door. (Jonathan Spiers)

“We just always had a calling to go back to nature. We both grew up with creeks in our backyard,” she said. “We finally found a piece of land that checks off a lot of the boxes that we’ve been looking for, so went ahead and purchased it.”

While they’re losing the visibility of their storefront with the move, Simon said she doesn’t expect that to affect business, as their Jackson Ward shop only received customers by appointment.

BigTree blends old print techniques with modern design technology using antique printing presses and an assortment of wood and metal font types that date back to the mid-1800s.

The firm recently developed a website for Piperbear, a Richmond-based interior design and property management company that it had previously worked with on a rebranding. Other projects in the works include new sites for Castleburg Brewery and wallpaper-maker Imagine Studios, as well as a consumer and trade campaign for Harkness Screens, a Fredericksburg-based projection screen manufacturer.

Congrats to Nate and Heather! Sounds like a good move and all the best to you both!