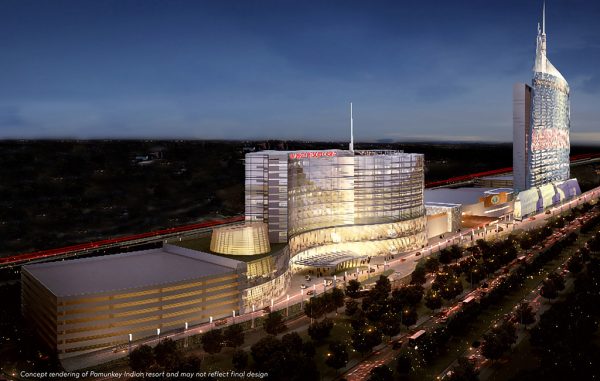 Citizens of New Kent County packed an auditorium Thursday evening to hear county officials discuss a possible casino development being pondered by the Pamunkey Indian Tribe, as well as a separate plan to reopen a local horse racing track.

The meeting was held at New Kent County Middle School, prompted largely by the news last month that the Pamunkey had acquired nearly 600 acres in the county for $3 million, and that the tribe may someday look to develop a $700 million resort and casino onsite.

Instead, the board of supervisors invited Minnesota-based law firm Foley Quigley, which specializes in Indian land development, to speak about the federal land trust process that would make the land a protected part of the Pamunkey reservation.

During the public comment period, many locals had questions regarding how a development would affect the local economy and what the process would be for approving the Pamunkey’s application.

Others were met with applause as they voiced opposition to a casino, citing bible verses and referring to gambling as sin.

No official plans have been filed for the land, which sits near the intersection of Interstate 64 and New Kent Highway.

Chief Gray said in an interview last month that a casino resort is just one possible use for the land, which could also house a variety of museums, schools, housing or healthcare facilities.

Gray said the tribe also has its sights set on land in other areas, as the group’s roots trace back throughout the Mid-Atlantic to 8,000 B.C.

“This is just one possible site that we’re looking at,” Gray said. “We’re looking at other areas that could work better or in conjunction with this site.

The Pamunkey plan to continue acquiring more land, though Gray did not specify how much more. He said that they want to acquire land both where the tribe once was and where they are wanted.

“We want to help the locality because we’re Pamunkey Indians and Virginians. We’re not looking to just anger the locality and put something in an area that’s not designed for that,” he said. 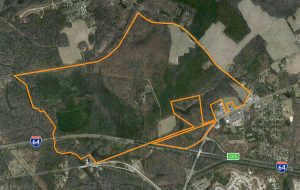 Pamunkey bought the land in New Kent with the financial backing of Jon Yarbrough, an entrepreneur who has assisted other Indian tribes develop projects.

It is unclear how long the approval process would take.

Once part of the Pamunkey reserve, the land is not subject to zoning laws or local and state taxes.

However, the tribe plans to enter revenue sharing agreements with the state and with any county where it chooses to develop. Gray offered an example of how that would work.

“If we did put a casino resort along the interstate in a somewhat rural area, chances are the local fire department isn’t capable of supporting such a thing,” Gray said. “Our plan would be to contribute to the county to ensure (it can support it). Those resources are now available to the rest of the county.”

Gray emphasized that the tribe would never expect a locality to spend its money to support their operation, and that their development may help spur further development in the region.

“If we put a casino resort somewhere, across the street there’ll be something that we don’t own, and we think that would be great,” Gray said.

The Pamunkey’s efforts follow a nearly 30-year process of gaining federal recognition, which is received in 2015.

As for what’s next, Gray said the tribe will continue to look into possible land to acquire and plan to submit the trust application by yearend.

“We’ve had a lot of interest from localities, even individuals. We’re trying to locate the land, continue to have conversations with leadership at the locality and state level,” Gray said.

Also discussed at Thursday’s meeting was the planned reopening of the Colonial Downs horse track, which has sat idle since 2014 and was purchased last month by Chicago-based Revolutionary Racing for around $20 million. The company plans to have racing begin at the site in 2019.

There is one outcome for the New Kent County board of supervisors in this, they will look ridiculous. They are fighting a casino? What do they think Colonial Downs is going to be? They have likely known about this all year – misinforming their constituents claiming they are just finding out.

“Others were met with applause as they voiced opposition to a casino, citing bible verses and referring to gambling as sin.”

I can’t wait to sin in New Kent County.

I’m right there with you . Dilly dilly