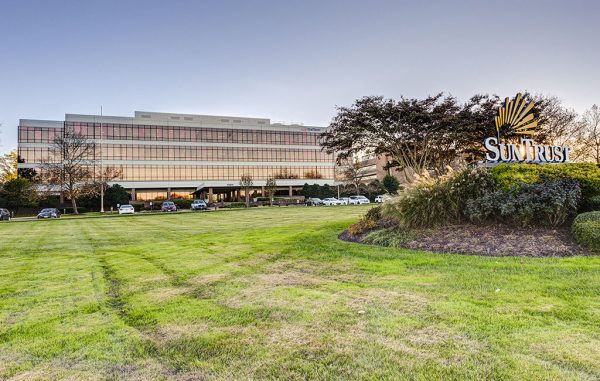 A pair of bank-anchored office buildings in Henrico has changed hands for the second time in a year, fetching nearly $20 million more than what the seller paid in early 2017.

The former WestMark office complex at 11011 and 11013 W. Broad St., now dubbed SunTrust Center One and Two, was sold May 24 for $62.4 million to Washington, D.C.-based FD | Stonewater. It marks one of the largest office transactions year-to-date in the county.

The seller, Atlanta-based Bridge Investment Group, bought the 32-acre campus and 420,000 square feet of combined office space for $45 million in February 2017. It was most recently assessed for $42.3 million, according to county records.

The complex is anchored by SunTrust, which signed a 10-year, five-month lease with Bridge Investment in October 2017 to solely occupy building one – a four-story, 214,000-square-foot facility.

SunTrust and Bridge Investment have since pumped more than $30 million into the space to modernize the 40-year-old structure with a new lobby, fitness area, cafeteria and HVAC system.

The property was Bridge Investment’s only holding in the Richmond market and marks the first locally for FD | Stonewater, which keeps offices in Los Angeles and Newport Beach, California.

FD | Stonewater financed part of the transaction with a $41.2 million mortgage from Starwood Mortgage Capital, according to county records.

Cushman & Wakefield | Thalhimer has been retained by FD | Stonewater to lease and manage the property.