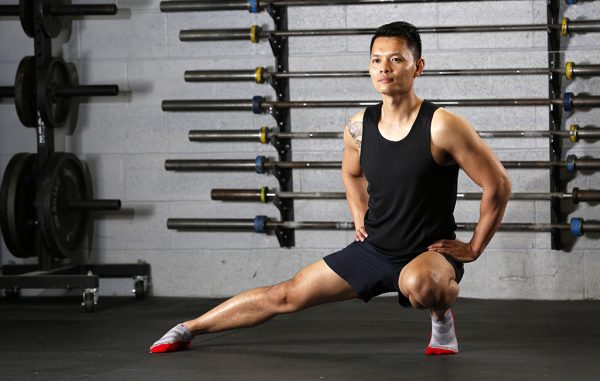 After ditching his sneakers, a local architect-turned-entrepreneur is launching a startup he hopes will gain traction in the shoeless running market.

The roots of Kinis go back to 2016, when Vu, a Vietnam native who landed in Richmond in the 1990s, began experiencing pain from running.

“I’ve always been very active and spent a lot of time at the gym, but I worked a lot of hours and didn’t have a lot of time to lift weights, so I kind of shifted my routine to running,” said Vu, who most recently worked as an architect at Baskervill. “I was never a big runner but I started doing 12 to 15 miles per week.”

Eventually he began to develop knee and ankle pain that kept him on the couch.

“I thought it was my shoes so I went out and bought new Nike running shoes, but the problem was still there,” Vu said.

He researched common foot injuries and realized his cushioned shoes were putting impact on the ankle and knee. Then he read “Born To Run,” a book by Christopher McDougall that documents the Tarahumara tribe in Mexico, known for their abilities to run long distances without sneakers.

“These people are in a secluded canyon and they run 50 miles per day with nothing but a sandal. I have a $150 running shoe and can barely run 2 miles. I was thinking, ‘Oh my god there’s something wrong with me,’” Vu said.

He talked further with personal trainers, anatomy professors and other doctors about how modern shoes affect form.

“What I learned was that we pretty much perfected the way we need to run through evolution. Our ancestors didn’t have shoes, and they were outside all day. They didn’t have arch support or gel inserts,” Vu said.

“But as you adapt and live in the modern society, your feet are weakened, which affects your running and lifting form.” 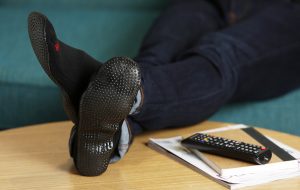 The socks have a patent-pending, rubber-like sole for indoor use. (Kinis)

Looking for a middle ground, he began developing Kinis socks, which have a patent-pending rubber-like coating on the bottom for running indoors, at the gym, or around the house and office.

“I see people doing squats and deadlifts, taking off their shoes at the gym, it’s because it’s a more natural way to exercise. A stronger body starts with stronger feet – they connect to everything,” Vu said.

After two years designing prototypes, on May 8 he launched the Kinis website, where socks start at $40. Vu said they’re designed to last a year and are machine washable.

The startup is based out of the 1717 Innovation Center in Shockoe Bottom and its products are manufactured in North Carolina.

After products like the Vibram FiveFinger shoes helped introduce barefoot exercise to the public a few years ago, Vu said he thinks the market exists for barefoot training.

“Barefoot running took off back in 2010 and 2011 and slowly died off because it’s not very practical in our society,” he said. “I think people and trainers are starting to see the benefit of barefoot training. They’re seeing it as a growing market.”

Vu is Kinis’ only full-time employee and the venture is self-funded. He said he’d like to begin wholesaling to local running shops and fitness studios before growing throughout the region.

He does plan to step into the outdoor market later this summer by releasing a sock that can be worn outside.

“Long-term goal is for Kinis to be an apparel company, but this is a good starting point,” Vu said.