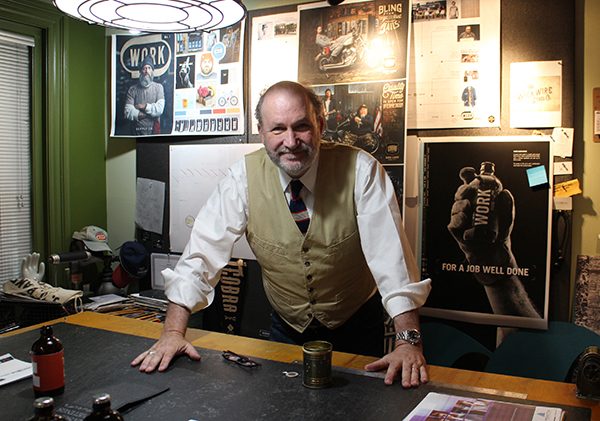 When the cannonballs were rolled out at this year’s Richmond Show, the annual awards banquet of the Advertising Club of Richmond, some of the weightiest ones went to a five-person shop that’s tucked inconspicuously in a house on Monument Avenue.

The workshop that is Cabell Harris’s Work Labs, on the ground floor of the residence he shares with his wife Patti, turned heads with its total of 13 of the coveted cannonballs, including six gold awards, three silvers, two bronzes, and two best-in-show awards, in the advertising and design categories.

The additional hardware comes at a turning point for Work Labs, which is marking its 25th year in business and transitioning to a new moniker, Work & Friends.

Harris said he’s looking to branch off the brand into various business ventures, working with a former retail client on a Work-branded coffee and with Hardywood Park Craft Brewery on a Work beer. An empty-nester, he’s also preparing to move Work out of his home, having received and accepted an offer on the property that is prompting him and Patti to downsize to 7west, a cluster of townhomes under construction across the river in Manchester.

Harris said he is looking into possibly locating his office in a joint venture with some of his clients that would involve an undisclosed two-story building in town with storefronts on the ground floor, his workspace in the back and a collaborative creative space filling the second floor.

A Richmond native and VCU grad, Harris, 59, is also transitioning out of his role at the VCU Brandcenter, where he has spent over a decade on the faculty, the last few years marketing the school more than teaching. One of the best-in-shows Work was awarded this year was for a tongue-in-cheek, documentary-style video presenting the Brandcenter through the eyes of a conspiracy theorist.

BizSense sat down with Harris to discuss Work’s winning work, its approach to creativity and his insights on the local marketing scene. The following is an edited transcript:

Richmond BizSense: What was the genesis of the Brandcenter documentary that landed Work one of its two best-in-show awards this year?
Cabell Harris: This year we rebranded the Brandcenter, which was pretty exciting. It was 20 years old, and some of the alumni had been saying that it had been like they were almost a secret society of sorts – that after 20 years, it’s like we embedded these alumni in these businesses like Google and Facebook and agencies, and after 20 years they had moved up into positions of leadership.

I wanted to give the appearance of reinforcing those things: let’s take that triangle (in the logo) and put a little starburst behind it, and it looks a little illuminati-ish. What we say we are is all the facts: We’re the No. 1 ad school in the country; we have a close-knit group. Well, what an outsider or conspiracist would say is they’re out to use mind control, they’re out to change the world – and just be more humorous with it.

RBS: Tell us about the other campaign that earned you a best-in-show.
CH: What I always thought was interesting was studying people’s behaviors and attitudes, and what are they based on. I’ve wanted to do a series where it’s (two photos showing) the same person, but how do you prop that person. And you don’t try to tell people how to think; you ask them how to think.

I wanted to take things like, imagine a 14-year-old kid holding a shotgun and then the same kid holding a little baby. Which one scares you most? Is this kid going to go shoot up a classroom? Or he might be on the farm and he’s just a hunter. The baby he’s holding, somebody’s reaction might be that’s his little brother he’s taking care of. Or it might be he’s the dad. So it makes you start thinking.

(Work designer) Chris Harris photographed a little girl that had one of the pussyhats on and then a Make America Great Again hat. You start realizing, if you believe like a Republican or a Democrat, you go, “Isn’t that cute, I’ll bring my daughter to the parade or the campaign function,” but then if it’s against what you think, you start going, “Oh, she’s being brainwashed, she’s being told how to believe.” It creates a discussion I think is interesting.

RBS: Describe your creative process.
Harris: Even though I think people look at me more like a creative, I think I’m more strategic. I don’t start projects before I really have an understanding of who am I talking to. That’s the audience, and you may have several audiences. This is the fun part, where it becomes a game in a way, because you try to go: “OK, I’m not doing this for myself. I’m doing it because it has to communicate to this audience.” I love that part, trying to get in the shoes of the person I’m talking to.

Then I start going, “Well, what do we want to tell that person? Why should they care about this product or service, and is it true?” That’s our strategy. You’ve got to figure out what you want to say, like in one sentence, and then I figure out how to say it, and that’s the creative. Then I figure out where to say it – that’s the medium. And then the last thing is: Was it effective?

RBS: How is Work’s approach different from traditional ad agencies?
CH: What the ad industry needed at the time (of launching Work), I thought, was they couldn’t afford full-time talent, but they still needed high-level talent work. So I started Work as an ad agency for ad agencies. Most people go: “What the hell does that mean?” It means you become like you’re the agency for that agency. A lot of people don’t realize how much freelance that these large agencies use, and they try to hide it.

They would call me in when an account was in trouble, when they ran out of time on a project, or it was a new business pitch. You become like a Navy SEAL team for agencies, and you learn to work really quick and smart, and just solve problems pretty quickly.