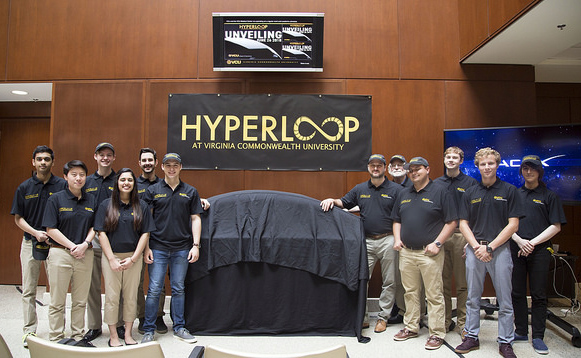 The students in Hyperloop at VCU will travel with its pod to California later this month to compete.

A group of VCU students is set to compete for Elon Musk’s attention.

Hyperloop at VCU, an organization made up of 40 of students from the university, will compete this month at SpaceX’s Hyperloop Pod Competition.

Hyperloop is an idea for a high-speed underground transportation system under development by SpaceX and Tesla, Elon Musk’s aerospace and car companies, with the goal of being an efficient alternative to train, plane and automobile travel.

In 2015, Musk announced the student competition as a way to speed up development of a prototype pod that theoretically would carry passengers and cargo through the Hyperloop’s system of tubes. 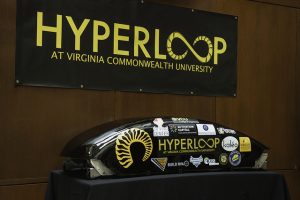 The student organization developed and built the pod here in Richmond.

This year is VCU’s first time in the competition and it is among the 20 finalists selected from entrants around the globe. VCU’s pod will be shipped to SpaceX’s headquarters in California, where it will be raced on a Hyperloop test track.

The pods must be self-propelled and will be judged on maximum speed with successful deceleration. VCU’s has been calculated to reach over 100 mph.

The group’s spent nearly a year designing and building the pod at Build, RVA, a community workshop and lab just north of Scott’s Addition.

“We ended up using an electric motor, something similar that would drive an electric car and using a large array of batteries to power it,” Kozak said. “We pretty much designed an entire electric car in 10 months.”

The competition will be held July 22. Until then, Chadwick said they’re working on final preparations.

“We’ve got a few minor tweaks and tests to be done before we ship the pod out. We’re not going to spend any time going on any vacations once we get to California,” he said.

The competition carries no cash prize, but it is a chance to catch the attention of Musk, as well as to make an impact on society.

“For me it was the idea of being able to do something that could impact the world and give a higher sense of purpose,” Chadwick said. “It’s been a massive learning experience. We’re trying to pretty much find the best design for a large-scale prototype.”

Protip: Play this song when you unveil the pod:
https://www.youtube.com/watch?v=JtH68PJIQLE