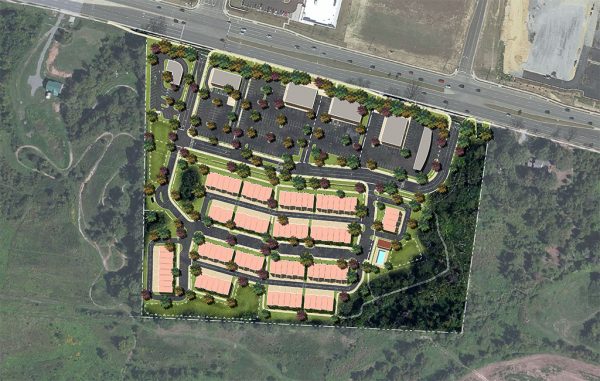 Plans for a 23-acre mixed-use development along the fringes of Short Pump have been scrapped.

Gateway West called for a cluster of up to 115 townhome buildings behind five outparcel commercial buildings lining West Broad Street across from Broad Hill Centre, including a proposed 24-hour Sheetz gas station and convenience store.

The development was set to hug the Goochland County line between The Pruitt Cos.’ Notch at West Creek and a planned Hampton Inn & Suites hotel by locally based Shamin Hotels. The site is also adjacent to proposed townhomes to the south beside the Markel | Eagle Partners’ GreenGate development.

Core Property had deferred its rezoning request for the site to January, after planning staff recommended the firm consider taller mixed-use buildings, and to better integrate the residential and commercial sections.

“The parcel’s [traditional neighborhood development] designation depends on the degree to which proposed uses are integrated with one another … and provide a high-quality visual contribution to the county’s westernmost gateway,” a June staff report related to Core Property’s rezoning request stated.

“Recent changes to the request have addressed some issues, but additional steps should be taken for the project to represent true mixed-use development.”

Core Property did not submit an updated site plan addressing the county’s request prior to the staff report being issued two months ago.

The company’s rezoning request, along with its provisional use permit (PUP) for the Sheetz convenience store and gas station, was scheduled to be heard during the county’s Oct. 11 planning commission meeting.

Core Property would not comment about its decision to withdraw its development application.

Its contract to purchase the Broad Street land from Schafstedde Properties, a Manakin-Sabot-based firm that has owned it since 1994, has ended, according to sources with knowledge of the deal.

Schafstedde Properties could not be reached for comment by press time Wednesday afternoon.

The property is listed with Taylor Long Properties for $10.5 million, according to the brokerage’s website. It most recently was assessed by the county for about $3.8 million.

The townhome boom in Western Henrico is absolutely stunning. This area needs to keep some of the limited green space that remains surrounding tuckahoe creek.

Andrew, there are thousands of acres of flood plain in the Tuckahoe Creek drainage area that are untouchable. The land needs to be used as efficiently as possible. It appears the County is looking for higher densities on smaller footprints and fewer out parcels fronting Broad Street. The question remains if that kind of mixed use actually works. The West Broad Village development continues to have issues with retail vacancy and expensive garage parking for apartments hasn’t been successful outside of the City core.

I’m not so sure the retail struggles of West Broad Village are due to the form of the development. If I remember correctly they started building this development at the absolute worst time based on the recession. I think they had a pretty good lineup of retail tenants before that hit and then they all cancelled their contracts (as they did in most places around the country) when the economy crapped out. When the economy lost momentum so did West Broad Village and they have struggled to recover from that, but it seems to keep getting better and not worse… Read more »