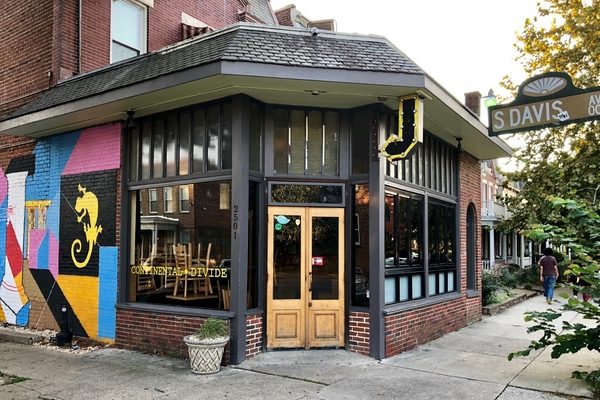 Benny Affamato’s is taking over the former Continental Divide space at 2501 W. Main St. in the Fan. (J. Elias O’Neal)

A Blacksburg-based pizzeria’s years-long search for a slice of the Richmond market is coming to fruition.

Benny’s, a chain of pizza joints founded by 2006 Virginia Tech grads Chris Brown and Zach Toth, is planning to open a new restaurant dubbed Benny Affamato’s in the recently vacated Continental Divide space at 2501 W. Main St. in the Fan.

The restaurant is targeting a winter or spring 2019 opening. It will be the 7-year-old brand’s 20th location, joining outposts across Virginia, the Carolinas, West Virginia and Pennsylvania.

“Everybody kept asking us, ‘Why haven’t you gone into Richmond?’” Brown said. “It certainly wasn’t because we weren’t interested. It was finding the right spot, and we feel like we have.”

Continental Divide closed Sept. 1 after four years of business at the location, while maintaining its Divide Ride Tacos food truck in Richmond.

Brown said they worked to secure the space once they heard about the closure, as they’ve been looking in Richmond for about six years.

“That stretch of Main Street in the Fan between Star-lite and Sticky Rice is in the middle of the action when it comes to bars and restaurants, and pedestrian traffic for the neighborhood,” Brown said. “We’ve been looking within that stretch of the Fan for a new location for years, so when it became available, we jumped on it.”

Richard Holden, principal broker and owner of Holden Realty, brokered the sale of Continental Divide’s restaurant equipment to Benny’s, along with an agreement for Benny’s to take over the lease.

Brown and Toth opened Benny’s in the belly of downtown Blacksburg in 2011, returning to town after careers as a government contractor and architect, respectively.

The location also will serve beer, and is looking to bring Blacksburg-based Pycone Creamery’s ice cream to the location.

“Pycone makes its ice cream in our kitchen in Blacksburg,” Brown said. “We’d love to offer it at this location, and are trying to work with them to bring it to Richmond.”

The name Benny Affamato is a nod specific to Richmond, keeping with a branding concept that Brown and Toth have adopted at each of their locations.

“We like the surname to represent something about the town we’re going into,” Brown said. “In Italian, affamato means ‘starving.’ Since there are a lot of starving artists in Richmond, we decided to call that restaurant Benny Affamato’s.”

The restaurant will seat 30 and employ about 12, and is scheduled to open at 11 a.m. seven days a week, closing at midnight during the weekdays and at 3 a.m. on the weekends.

While Brown would not disclose what they spent to upgrade the space, he said he is designing it himself. He said the pizza oven and kitchen will be at the front of the 1,400-square-foot space.

Benny Affamato’s joins a running tab of pizza joints stuffed into and around the Fan.

Pies & Pints opened its first Virginia location at 2035 W. Broad St. in May across from the future Whole Foods-anchored Sauers Center development; Pupatella has been firing up pizzas at its location at 1 N. Morris St. for about year, with plans to open a second location near Innsbrook in Henrico County; and Chris Tsui’s EAT Restaurant Partners opened Pizza & Beer of Richmond (PBR) in June in the Cary Street Station development at 2553 W. Cary St.