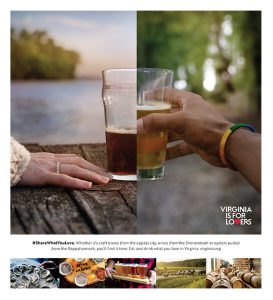 Martin’s new campaign is called “LoveShare,” an update on the “Virginia is for Lovers” slogan that Martin created 50 years ago.

Ndp won a Distinction Award from the American Association of Port Authorities for a digital ad campaign it created for the Port of Virginia.

The Martin Agency released its first work for Virginia Tourism Corp. since landing its lead agency account in December. Called “LoveShare,” the campaign features videos that update the “Virginia is for Lovers” slogan that Martin created for the tourism office 50 years ago.

Martin launched a campaign for Timberland Pro called “Always Do. Never Done.” The campaign highlighting tradespeople includes a video and four broadcast spots. The agency also released a video and three supporting clips as part of its “All Together Better” campaign for Land O’Lakes.

Local photographer Cade Martin produced images for a campaign by Florida-based Paradise Advertising for Visit Savannah, part of the Savannah Area Chamber of Commerce. The campaign, called “This Isn’t Ordinary. This is Savannah,” is featured on the Visit Savannah website. 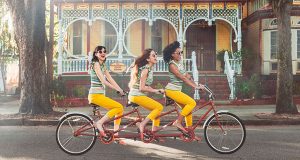 An image from Cade Martin’s new tourism campaign called “This Isn’t Ordinary. This is Savannah.”

Advertising Club of Richmond is accepting applications through Oct. 19 for mentors and mentees for its annual mentorship program. Students and young professionals will be paired one-on-one with an ad professional to provide career advice, recommendations, portfolio reviews and internship opportunities. The program is free and club membership is not required. Applications and more details can be found on the club’s website.