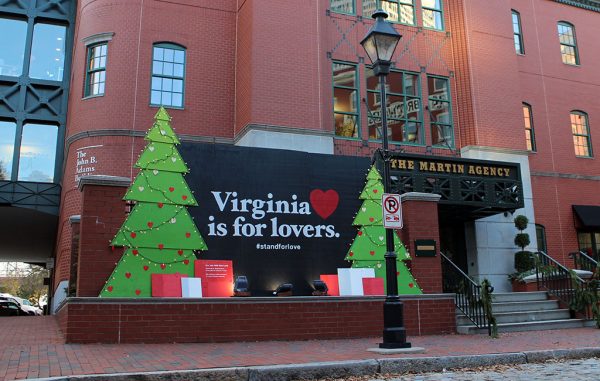 A Virginia is for Lovers sign outside the Martin Agency’s headquarters in Shockoe Slip. (Jonathan Spiers)

After a trying couple of weeks that saw its chief creative officer ousted amid sexual harassment claims and the naming of a new CEO, The Martin Agency has received an early Christmas gift to start off the New Year, courtesy of one of its earliest clients.

Martin has been named agency of record for Virginia Tourism Corp., the state office it made famous with the “Virginia is for Lovers” campaign it created nearly 50 years ago, when the agency was known as Martin & Woltz.

The 18-month, multimillion-dollar contract, which covers all creative and paid media work for the office effective Jan. 1, 2018, is timely in light of the slogan’s upcoming 50th anniversary in 2019, as well as Martin’s recent reuse of the slogan in response to events surrounding a deadly white supremacist rally in Charlottesville in August.

It also comes at a time when Martin has been at the center of controversy that has made national headlines since Dec. 1. That was the day Joe Alexander, Martin’s chief creative officer since 2012 and a 26-year employee, was dismissed from the company in light of sexual misconduct allegations made against him within the agency.

Despite those events, Virginia Tourism CEO Rita McClenny said the office had no concerns in awarding the contract to Martin, which the office selected over multiple agencies across the country that responded to a formal request for proposals.

“They’re a highly regarded agency, and this is about business,” McClenny said.

“I can say unequivocally that we have no concerns as it relates to that environmental consideration, because this is about hiring the best, most creative team and doing the business of promoting ‘Virginia is for Lovers’ so we can get more people coming to Virginia to spend money and to be able to enjoy our many tourism and hospitality assets that we want to promote around the world,” she said. “We’re a global brand, and certainly The Martin Agency has a lot of experience working with global brands.”

Martin spokesman Dean Jarrett said the new work is welcome news for the agency, which has been downsizing since losing one of its larger accounts, Walmart, in 2016. The agency cut its workforce by about 5 percent two months later, laying off 29 employees, most from its Shockoe Slip headquarters.

In March this year it laid off another 21 employees, or 4 percent of its workforce, and closed its New York office. The company still employs about 450 workers and maintains a London office in addition to its Richmond home base.

Jarrett said adding Virginia Tourism as a client is significant for the agency, bringing the two full circle since the creation of the slogan that helped put both on the map.

“In our 52-year history, Virginia is for Lovers, which was launched in 1969, is still one of the slogans for which we are best known,” Jarrett said.

The RFP followed the expiration of Virginia Tourism’s contract with its previous agency of record, BCF in Virginia Beach. McClenny said Martin will be responsible for all promotional materials, marketing, creative content and media buying for the contract’s duration through mid-2019.

The contract comes just months after Martin revisited the slogan in the wake of the rally in Charlottesville that left one person dead and put an international spotlight on the city and the state. Agency staff responded with a new slogan, “Virginia is for everyone,” and the social media hashtag #StandForLove. The hashtag is included on a “Virginia is for lovers” sign that’s been displayed ever since in front of Martin’s headquarters building.

“We reached out to our friends, Rita and others, at the VTC and shared with them what we wanted to do, and they embraced it,” Jarrett said of the StandForLove idea. “For us, it was a healing thing and something that we felt like we could do, of course with their blessing, that might be a positive voice moving forward at a time that was very difficult.”