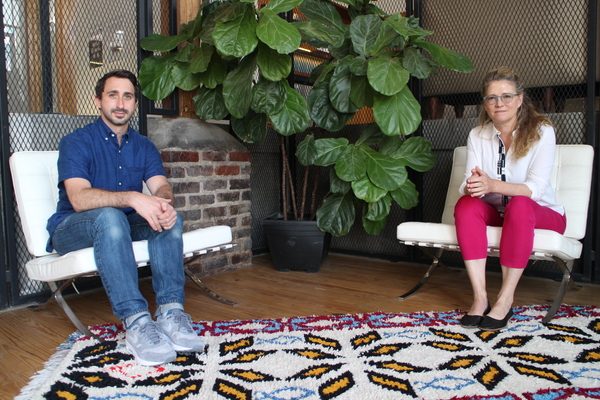 The two never had met when Hodges invited them to join the Arts & Letters fold. In fact, they said, neither knew that Hodges was talking to the other or would ultimately bring on a third ECD.

Now, six months on the job, Flagg and Grossman work with Hodges as an ECD trifecta, collaborating on some projects and branching off on others. It’s an executive-level creative leadership structure rarely seen in agencies their size, but they say it fits perfectly with Arts & Letters’ “make up the rules as you go” approach.

BizSense sat down with Flagg and Grossman to learn how they work as a team, their respective approaches to the creative process, and what inspired them to make the move to Richmond. The following is an edited transcript:

Richmond BizSense: What made you want to move from New York and Los Angeles to join Arts & Letters? Why was this worth the leap?
Danielle Flagg: Part of it’s just the adventure and the not knowing, but doing that with people who I very much respect – who have had some experience and incredible track records, and who are just good people, limited on the politics, the hierarchy.

Jed Grossman: A lot of it is location. I don’t think I realized that before I got here, but being isolated a little bit from the majority of the advertising and creative community in New York, Chicago, L.A., it requires us all to stretch our brains a little bit more. And when we’re finding people to join us, you have to really want it, because it’s a little different than what you’re used to. I think that adds to the magic of Arts & Letters, but I’d argue it probably adds to the magic of all of the shops in Richmond as well.

RBS: Most agencies have just one executive creative director. How does it work with three?
JG: Historically I’ve seen it work multiple ways. I think it really depends on the people. In our situation, the way we work, we all are autonomous with the work in front of us, but then we come together and collaborate when we need to and when it feels right.

DF: The small factor, the few people we have here, makes people want to be even more collaborative and connective about building something, because we all want the success for the entire place. The larger agencies can get – the more you’re focused on your own work and role and success – very siloed.

RBS: What’s your creative process? Have you developed a particular approach or steps you take to tackling a project?
DF: The thing about this place is I don’t know that there is ever one approach. On the one hand, when we do briefs, we want to make sure everyone’s involved in the brief – the producer, project manager, maybe even an editor. We want to have a lot of people, not just the creatives in a brief. Other times, it’ll be over Slack. We’ll take half an hour, the whole agency, and, “We need this music track.” And it’ll be this really collaborative, democratic, throw-your-ideas-in, and that can be for music or for a concept, a little minibrief where you put your headphones on for half an hour and everybody is individually making something and submitting it. 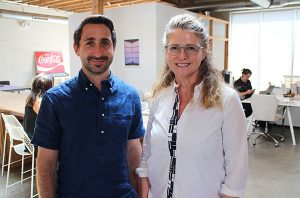 It’s like pieces of the pie, the process, and it changes. That’s the thing: we’re making up our rules as we go, and that’s what we love.

JG: We’re not afraid to shake up our team structure. That’s a big part of our process. What defines a traditional creative team is: art director, copywriter, and you have those siloed stacks on top of it, and you have the support team underneath it. Here, it’s not uncommon for us to brief an art director, a writer, an editor, and a UX designer at the same time and expect them all to be part of the conceptual phase and not wait for their moment.

RBS: Have you ever had a project that was the one that got away? Where people didn’t see eye to eye, or you weren’t able to execute your vision?
DF: There is one account that was definitely tough in the end, which was Starbucks, when I was at Wieden+Kennedy. We had a whole campaign for them, and they wanted to test it in Detroit. That was a real sad thing to me in the end, that they couldn’t put the energy behind what their total brand story and voice was.

Ultimately Dan Wieden said, “I think we need to go separate ways.” They didn’t get away; the dance partner thing just didn’t work in the end. It still was emotional for me. You feel so invested and excited about how a brand can be portrayed out in the world. Obviously Starbucks is an incredibly beloved brand, so it wasn’t like they needed us, but we really wanted to tell their story in a time when they were becoming more ubiquitous and on every street corner.

RBS: You don’t hear that so often, where if the agency can’t get to what it sees can and should be done, it would walk away.
DF: It creates a level of integrity about who you choose as your clients. The client-agency relationship, that’s why it’s a relationship – it’s two sides trying to work toward something together, as opposed to one side demanding something and the other just providing it as a vendor.

Dan Wieden was a very inspirational person to me in that way, to be able to talk honestly to a client, not fearing that he’ll upset them but really that he just wants to ask honest questions and have them ask really honest questions of themselves, and push us and push the work.

RBS: If you could ask one person a question right now, who would that person be and what question would you ask?
DF: David Bowie is one. He was a major influence in my growing up, and the idea of change and evolving and probably a mercurial way of presenting your life and telling stories. I don’t know what I would ask him. And Joni Mitchell, to me, was a huge inspiration in terms of lyrics and artistry. She was a force of nature, and I would probably ask her: Why didn’t you run for some political role (so) that you could effect change?