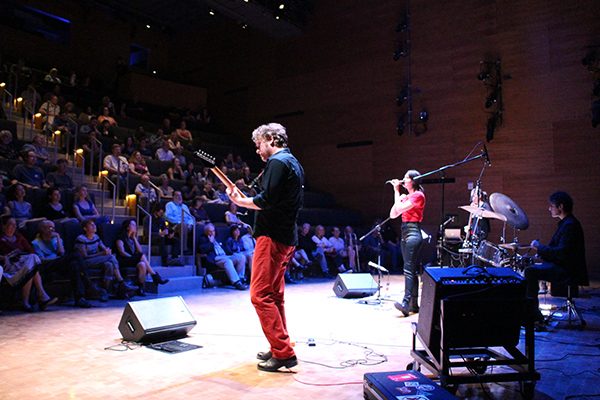 If business networking can be compared to the recording industry, a Richmond networking series centered on live music has done the local equivalent of getting signed by a major label.

The Institute for Contemporary Art at VCU this month launched its own version of In Your Ear Studios’ Shockoe Sessions, the 2½ -year-old, invite-only concert series that blends business networking with live music performances.

Coined “In Your Ear presents: The ICA Sessions,” the new series kicked off with a concert last week in the ICA’s 204-seat auditorium – a sizable step up from the smaller but more intimate space at In Your Ear, which will continue to host the Shockoe Sessions series.

In Your Ear’s Carlos Chafin, who conceptualized and launched Shockoe Sessions in 2016, will curate the ICA Sessions the same way he does with Shockoe Sessions, highlighting the local music scene with bands and artists based in or connected to Richmond. Last week’s concert featured local Turkish pop band Yeni Nostalji.

Chafin introduces the band in the ICA auditorium. (Jonathan Spiers)

Artists who play Shockoe Sessions likewise would be in contention to play the larger ICA Sessions, which Chafin said would follow the same spirit of connecting people through the arts.

“We will be sort of the breeder,” Chafin said of Shockoe Sessions and In Your Ear. “We will determine which bands and people ought to be involved in the ICA event as well.”

The idea for an ICA version of the series came about through the same sort of connections that have become common at the underground (literally) Shockoe Sessions, which not only take place in In Your Ear’s below-ground-level studios but also are attended by invitation-only guests, likewise selected by Chafin based on business pairings and probable connections.

Joe Siepel, the ICA’s interim director, was among those invited to one session this year, liked what he saw and wondered how the ICA could do something similar. Carol Anne Lajoie, director of development and external affairs for ICA, said that visit coincided with discussions about how the institute, which opened this spring, could enhance community outreach and attract more members.

“We went down and met Carlos and toured the studio, and Carlos is Carlos: No one is more passionate about local bands getting a platform than he is,” Lajoie said.

“We started thinking about it and said, ‘It doesn’t make sense to try to do this on our own and navigate the local music scene.’ Our programs are most successful when we’re tapping into a resource,” she said. “I called Carlos and said, ‘We have a pitch for you.’ He said, ‘I’m listening.’” 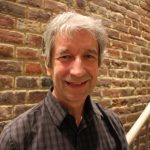 As Chafin tells the story:

“They took me out and said: ‘We want to steal your idea,’” he said with a laugh. “I said, ‘Well that’s flattering. What are you thinking about stealing about it?’ They said: ‘Everything. We actually want it to be exactly the same. We just want it to be twice as big, and we want to have it at the ICA.’

“It will be a function for the ICA to recruit business people into the institute,” Chafin said. “They’re looking for stronger, better connections to the younger business crowd in Richmond.”

With money available in the ICA’s budget – Lajoie said it costs about $3,000 to put on each show – the arrangement includes paying Chafin for his services, paying a sound engineer and videographer to record the concerts, paying the bands and providing free food via the ICA’s Ellwood Thompson’s café.

“The musicians start to get a new following around town that can help them, and we have this amazing theater that needs to have music heard in it. So it was a great symbiotic relationship,” Lajoie said.

Chafin said he expects the ICA Sessions to create the same connections that he’s witnessed at Shockoe Sessions, which he tailors around a presenting business sponsor that also helps shape the guest list.

Among the business that Chafin has seen result from the sessions is Marketing Mixtape, a branding agency for music acts launched by VCU Brandcenter alum Whitney Asher, who performed at the first Shockoe Sessions concert. 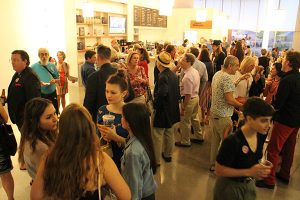 Attendees mingle at the cafe prior to the concert. (Jonathan Spiers)

“It’s pretty infectious, because it makes those connections happen and brings people out,” Chafin said of the concerts. “(Attendees) have questions in their heads answered by going to these events and meeting people – and sometimes meeting people they never would have met any other way.”

Lajoie said sponsors are sought to help fund ICA Sessions and keep the series going. Concerts will be held monthly on Wednesdays, though no concert is scheduled in November. The next concert in December will feature slide guitarist Elizabeth Wise.

Concerts are free and open to the public but require registration through the ICA, which will announce each concert to email subscribers, and via its website and social media.

In Your Ear concerts have been going on for ten or more years. I’ve been to some remarkable shows there. what changed 2.5 years ago?