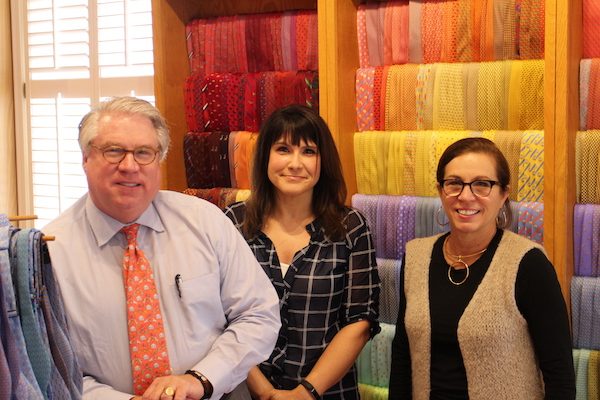 In 2009, Dick Fowlkes and Kate Ackerly opened an envelope that would change the trajectory of their company for the better part of 10 years.

The brother-sister duo owns Peter-Blair and Peter-Blair Accessories, the high-end menswear and accessories stores at 5800 Grove Ave. in the West End.

Fowlkes opened the shop in 1993, and began designing and selling Italian-inspired, bold-patterned neckties on the side in the early aughts. Ackerly joined the company as lead designer, helping to grow the accessories side of the business by designing ties, bow ties and cummerbunds. 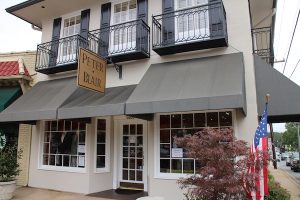 Peter Blair’s been open in the Libbie-Grove corridor since the early 1990’s. (Mike Platania)

The envelope they received in 2009 contained a letter from Blair Corp., an online discount retailer of men’s and women’s clothing that’s been around since the early 1900s. The letter claimed that Fowlkes and Ackerly were infringing on Blair’s trademarked name, and demanded they stop using the name for its online sales, a medium for retailers that was really gaining steam at the time.

Fowlkes and Ackerly were surprised, mostly because they believed the two brands weren’t necessarily competitors: Peter-Blair’s ties start at around $90, and Blair’s website shows ties ranging in price from $12 to $25.

“I was so upset at first, because we were nothing like them: quality, cost, everything,” Fowlkes said.

The siblings were worried enough to hire a lawyer to look over the letter and lawsuits Blair had brought against other companies with Blair in their names.

Missy Snyder, Peter-Blair’s CFO and COO, said they had reason to be worried.

“They’re big business, and they have big-time lawyers that comb the internet, looking for companies. They’ve actually shut down companies that have the name ‘Blair’ in their name,” Snyder said.

Their counsel estimated it would cost the company at least $100,000 to fight the claim, and that it wasn’t likely they’d win. The lawyer suggested they walk away and comply with Blair’s demand.

“And I said, ‘No, I want to write them a letter,’” Fowlkes said. “And (our lawyer) said ‘I think you’re making a mistake, it’ll make you look very weak if you write a letter and beg.’”

Fowlkes insisted, and he wrote Blair a letter explaining that he named the store after his two godchildren, and included his argument for why he didn’t believe Peter-Blair was a threat to Blair LLC, asking them to reconsider letting Peter-Blair run its online store.

Blair responded, saying that it wouldn’t bother Fowlkes as long as he sold only Peter-Blair’s own brand of ties, bow ties and cummerbunds online. 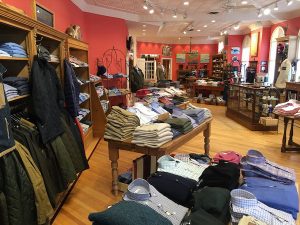 But it wasn’t a total win. Everything that wasn’t a Peter-Blair branded tie, bow tie or cummerbund had to be taken off its website. That was tough to swallow, as it came at the time with shoppers increasingly leaving brick-and-mortar stores in favor of e-commerce.

“It was probably a lot (of lost revenue),” Snyder said. “People were starting to buy on the web more and more. That whole chunk of our business was gone.”

“And people aren’t wearing ties like they used to,” Ackerly said. “We needed to branch out with the accessories company, but we couldn’t because of this infringement.”

For years they complied with Blair’s demands, operating carefully so as not to shake things up.

At one point Peter-Blair was featured on “The Today Show.” Ackerly said the media exposure was unnerving. She said they were afraid being on the show would catch Blair’s attention and prompt them to come back at them.

As time went on, Fowlkes, Ackerly and Snyder began to ponder whether to change the company names to get around the obstacle, and even brought in focus groups in 2017 to test other names.

They contacted Natalie McNamara of local firm CreativeMktGroup about a possible name change. While they ultimately decided against changing the name, reaching McNamara wound up being a pivotal moment.

They found other companies with “Blair” in their name that had applied to trademark their name.

“Blair would come out strong, and usually the applicant would back down,” Dunlap said. “But on a few occasions with some pushback from the applicant, Blair would negotiate a settlement.”

Armed with newfound confidence and a negotiation tactic recommended by Pike, Peter-Blair applied in July 2017 to trademark its name for the right to have a full online store.

“(Pike) said we should purposefully put extra items (to sell online) into the trademark that we weren’t interested in pursuing,” Snyder said. “So that if Blair wanted us to concede in some way, we’d have something to give up.”

When companies apply for a trademark, the U.S. Patent and Trademark Office provides a period of time for others to oppose it. Pike and Dunlap said that those oppositions typically are filed at the 11th hour. 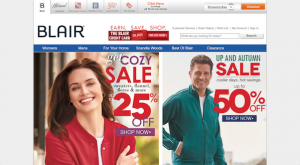 “It was a big downer; we thought maybe we were going to fly under radar,” Snyder said.

However, Blair didn’t provide any evidence for its opposition and asked for a 90-day extension, which was granted. At the end of that extension, Blair requested another extension for 30 days, which would be granted only if Peter-Blair agreed.

Blair’s lawyers contacted Pike and told him they were going to fight the application.

After some back and forth, Pike successfully negotiated for Blair to drop its opposition, on the condition that Peter-Blair remove some of the aforementioned items in the application. Pike’s over-ask tactic worked.

Finally, this year on Aug. 9, Peter-Blair received yet another critical letter: The USPTO sent a judgement declaring Blair’s withdrawal of its opposition, and that “the opposition is dismissed with prejudice.”

The “dismissed with prejudice” bit meant that Blair LLC can’t come back at Peter-Blair with any future claims, and the phrase was included in the USPTO’s judgement because Blair never submitted any evidence. 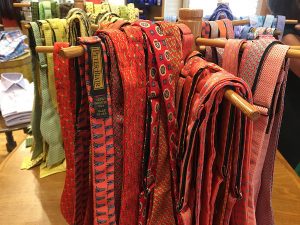 Some of the shop’s own brand of ties.

“We should’ve went out and celebrated,” Snyder said, laughing. “We were just dancing and hopping around the room.”

Dunlap and Pike, who met while studying law at the University of Richmond years ago, were equally excited.

“I really liked seeing them that first day. They were so confounded,” Pike said. “Now their vision of their future’s totally changed.”

Requests for comment sent by BizSense to Blair were not returned by press time.

“I hope other people will get the same mojo to go out and try,” he said. “(Our story) also allows you to know that you don’t have to have a big firm to fight for you.”

They’re also now able to turn the tables, going on the offensive against other big companies that it believes are infringing on Peter-Blair’s newly acquired trademark.

“(Dunlap and Pike) made us realize how damaging it was to not copyright some of our designs. There are companies that have copied (our designs), like Vineyard Vines, who’s much bigger than us. Bernie and Tricia have sent cease-and-desist letters on our behalf,” Snyder said.

Glad to see this dismissed with prejudice. Dick and Missy have built a strong brand selling menswear and they deserve to keep Peter-Blair

I can identify a Peter-Blair branded necktie in a church crowd or at the office.
The designs are subtle yet fun—especially Chick Magnet and WhisKey!
Dog Paddle, with the black Labrador retriever, is my husband’s favorite.