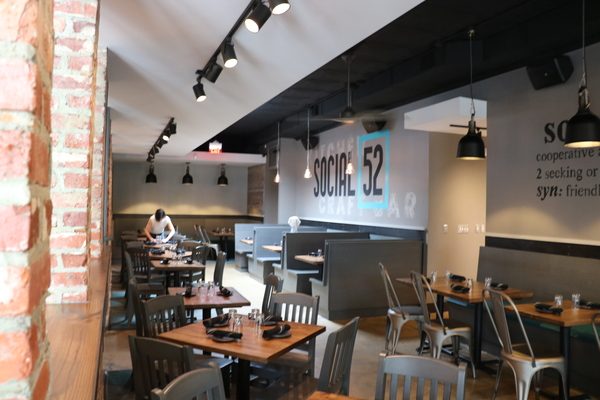 Changes to the space included a realignment of the restaurant’s interior layout. (Charlotte Woods)

A 5-year-old restaurant and bar in the Fan has come back to life following a summertime shutdown and nearly $500,000 in renovations.

“There are a lot of things that we wanted to do five years ago when we had this concept of Social,” Walied Sanie said of he and co-owner James Baldwin. “We built our own booths and tables and chairs. When you’re starting out and you don’t have a lot of money, you do anything that you can.”

With the business well-established, the company decided a more substantial remodel of the location was the first step in establishing a brand as it considers expanding to other areas of the state. Sanie said they’ve scouted spots in Richmond’s Southside and Williamsburg.

“With this redesign, we have touched every single wall,” Sanie said of the roughly $450,000 project. “It was a full gut, so to speak.”

Changes to the space included a realignment of the restaurant’s interior layout. Previously, due to the location of the entrance, customers had to walk through the dining space to access the bar. 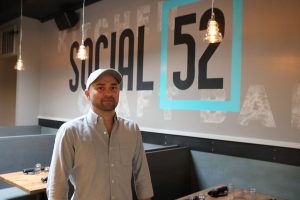 “We didn’t want staff to have to walk out of the kitchen, through the bar area. It just didn’t make sense,” Sanie said. “Our architect said, ‘I don’t think your guests would notice the slight change, but your staff will love you for it.’”

The architect for the project was Bob Steele and his wife Robin was the designer. B & L served as the contractor.

The previous layout also hid the bar from street view. That’s changed now that it’s on the opposite side of the building.

“The bar is what is 90 percent of the time the most busy, but when you can’t see the bar people always assume it’s slow,” Sanie said. “Just driving by, we didn’t really have much curb appeal.”

Social 52’s menu also is getting a makeover as it looks to focus on brunch and lunch, along with happy hour and dinner. It already had an established late-night crowd.

Sam Schleicher is the new chef.

“He’s going to be the future of where we take Social in the next couple of years,” Sanie said.

The bar has expanded from 18 to 24 taps, four of which are cocktails. The current on-tap cocktails are lemon drops, Manhattans, a hard seltzer and Moscow mule.

“We took a coffee slow-drip infuser and we decided coffee was too boring, so we are now infusing bourbon,” Sanie said. “And Chris Spencer, our bar manager, comes up with different infusions.”

A recent infusion is banana and citrus with cinnamon and cloves, that Sanie said makes for a “really good Old Fashioned.”

Social 52’s logo and signage also has been updated, in conjunction with an exterior paint job.

“Our painter painted over the entire building, including the old logo,” Sanie said. “So we put a feeler out on social media asking for local artists to come in and help us.”

An artist by the name of Analogy LLC was chosen to design the new logo.

Sanie said the business was able to retain much of its previous staff despite the three-month closure. And he hopes previous patrons will return to check out the new look.

“I hope that our previous guests will come back and be wowed by the changes, and I hope that we’re able to capture some new guests as well,” he said.

The old layout felt disjointed and they’ve done a great job with their renovation. I’ve been once for happy hour and once for dinner since the reopening. I also agree the menu revamp has gone well. My only suggestion is they need to invest in sound dampening, because nearly all surfaces inside are hard. It becomes extremely loud, which ideal for dinner time.