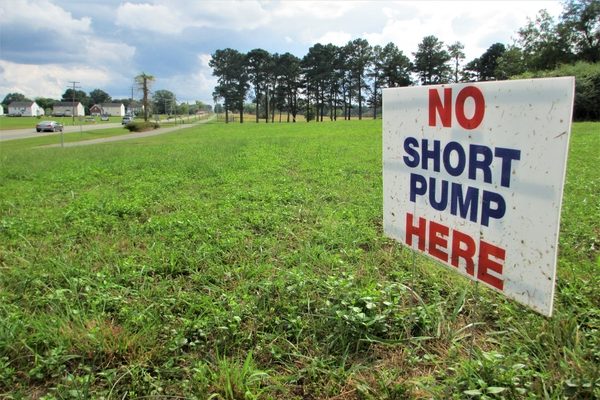 Signs posted on some lawns along the Route 5 corridor convey concerns of impending development. (Jonathan Spiers)

Signs posted on some lawns lining the two-lane byway south of Richmond read “No Short Pump here” and “No 4 lane Route 5” – sentiments that Henrico planners say have played a part in the county proposing a study of the Route 5 corridor from Rocketts Landing to the Charles City County line.

The study, which would cover the 14-mile stretch 500 feet from both sides of the road’s centerline, would produce guidelines that the county would use in considering development proposals, according to the study’s webpage.

That has property owners such as Dana Miller, whose family residence along the road displays several of the signs, concerned that the study is a precursor to development and a widening of Route 5 to four lanes in that area.

Miller said one concern is that this latest corridor study is just an indicator of the inevitable. She cited previous studies (a regional effort in 2011 focused on a shorter stretch from downtown to Route 895), the Virginia Capital Trail bike path that runs along the front of her property, and the nearby Tree Hill Farm that has been planned and approved for a massive mixed-use development. 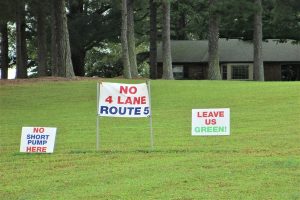 Some of the signs posted along the two-lane byway south of Richmond. (Jonathan Spiers)

“I had to give up property to the bike trail, which I did not want to do. I don’t like the pressure of feeling like I’m about to be told what to do with it again,” said Miller, who said she’s been approached multiple times in recent months by parties seeking to buy or lease her land to build a road-fronting store or other use.

Miller said she’s not alone in her opposition, which she described as in the same spirit of efforts against widening the rail line in Ashland and Chesterfield County’s proposed industrial “megasite.”

“I’ve been speaking with people over the past year, and they would like to see it stay uncluttered and green,” Miller said of the corridor. “Many have moved there to get away from the West End, Williamsburg Road, Northern Virginia, and now they feel like it’s following them.

The differences between that developed part of the county and the comparably untouched Route 5 area is precisely what the corridor study is intended to help protect, said Jean Moore, Henrico’s assistant planning director.

Moore said the study stems from the county’s 2026 Comprehensive Plan that identified Route 5 among 30 focus areas requiring further study. Unlike other studies, like a 2010 Innsbrook study that’s helping guide urban infill development in the office park, Moore said the Route 5 study does not suggest changes to land use or transportation. 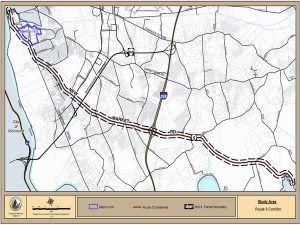 The Route 5 corridor from Rocketts Landing to the Charles City County line.

Because Route 5 is a state-maintained road, any plans to widen it would fall in the jurisdiction of the Virginia Department of Transportation. Moore said VDOT conducted a study with the City of Richmond, but she said that study was tabled and has not been acted on due to opposition to potential widening.

“What this study does is focus on what can we do now to put some design guidelines in place that keep the integrity of the corridor,” Moore said. “Regardless if VDOT came in and wanted to widen it or not, there are things we want to do now to lay the groundwork.”

Development activity and interest have been pushing southward from the city for years, spurred in part by the mixed-use redevelopment of Rocketts Landing, which straddles the border between Henrico and the city. In addition to Tree Hill Farm, other sizable tracts of land fronting the river have been floated for development, including the 477-acre Chatsworth property that was listed three years ago but never sold.

If adopted, Moore said the study would lead to updates to county code that would help maintain the corridor’s rural character. A public hearing on the study had been scheduled for Thursday night but was rescheduled due to weather. The county planning commission now plans to hold that hearing Oct. 18 at the New Bridge Learning Center in Varina.

The 17-month effort, which kicked off in May 2017, has involved multiple meetings and other public outreach that Moore described as the most extensive undertaken by Henrico. While Moore said feedback the county has received has been largely positive, Miller said she and others planned to still voice their concerns when the hearing is held.

“We just don’t want to be Short Pump,” Miller said.

The study and accompanying documents are available here via the county’s website. 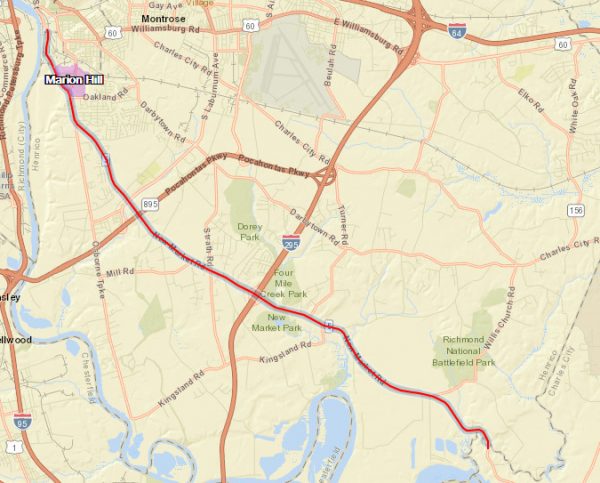 One problem with widening Route 5: where would all the extra traffic go once it reaches the City of Richmond? East Main Street is already quite clogged, and with the James River in proximity to Varina and that part of the east end there’s hardly anywhere else to build additional roads west.

Route 5 does not need widening. Removing the ridiculously high toll on the 895 Bridge going from Varina to south of the James would be the biggest help! The toll plaza is owned by Australians and avoided by many due to the high cost. As a result, people in the easternmost end of the county go into RVA to pick up their next leg of the commute, which contributes greatly to the congestion on Route 5. Changing that toll would help a lot!

You likely need to talk to the State about the tolls on that bridge. If I remember correctly Henrico had nothing to do with it. Since it was a public/private partnership the state would need to pay off the Australian “owner” of the road since it is the tolls that are paying them for their investment. Talk to you state legislator or senator.

Several years ago while representing the owners of the 70 vacant acres at Route 5 and I-295, Bill Mattox and I met with the county planners to ask what they would approve on the site. We were told that the county “vision” for it was “Innsbrook” . They wanted a high density office park! We asked what the basis was for that vision, and we were told “that’s what we foresee”. No residential, no retail, just office uses. I wonder what’s become of that vision?

It probably means they did not like your proposal. Maybe their vision is that they don’t want anything to go there. Or maybe they don’t want to waste a prime site next to an interchange for something they don’t like. What does the comprehensive plan say?