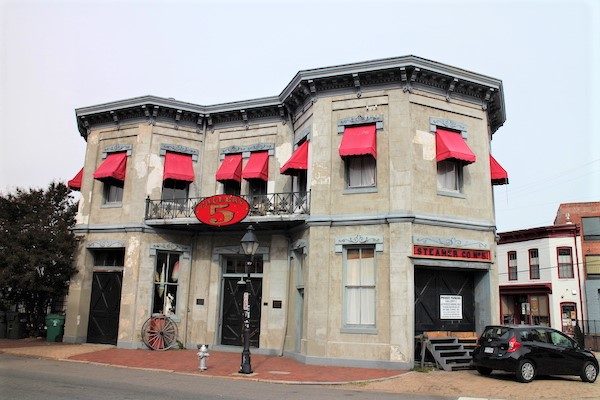 Extinguishing fears that it may have to move out of its longtime home, a local art gallery’s future appears to be secure.

The Gallery5 building, a former firehouse at 200 W. Marshall St., was purchased this month for $760,000 by locally based Vanderbilt Properties.

Gallery5 is a nonprofit art gallery that’s hosted visual and performing arts series since 2005 in the former Steamer Co. No. 5 building.

Vanderbilt Properties’ owner Bruce Vanderbilt said the company is planning a complete renovation of the building that will cost between $500,000-$600,000, and that a long-term lease with Gallery5 is in the works.

“We are happy to be working with Gallery5. They’re prepared for long-term security in the building,” he said.

Prabir Mehta, Gallery5’s board chair, said for the last year the organization operated in relative uncertainty because the building was for sale.

“We didn’t know if the previous owner was going to turn it into condos. There were a lot of plans that were kicked about that never came to fruition,” Mehta said.

“We’re excited to work with a new owner that’ll allow us to stay around for a while. … This is going to be the next era of Gallery5.”

Vanderbilt will renovate the building’s 3,500-square-foot upper floor into office or event space, while redoing the downstairs for Gallery5.

“(The building) has fallen a little into disrepair,” Vanderbilt said. “There are a lot of cosmetic issues and the roof has been a problem. … The systems, like the electrical, are dated.”

The downstairs space will be tweaked by Gallery5 as it needs, Vanderbilt said, since the gallery will have less room than now. It currently occupies both levels.

Vanderbilt said his company will be paying for the structural and upstairs renovations, and that Gallery5 will be responsible for the financing of the renovation of its space.

Mehta said Gallery5 has been seeking more grants and fundraising more aggressively in recent years, and now that its future is clearer, the nonprofit will be able to add more programs and events.

“We’re treating this as a wonderful growth opportunity,” Mehta said.

Gallery5 has an annual operational budget of about $250,000, Mehta said, and two employees.

Mehta and Vanderbilt said they’re aiming to limit gaps in service for Gallery5 during the renovation, acknowledging there may be short periods of downtime.

The 7,000-square-foot firehouse was built 135 years ago in 1883. Vanderbilt said it’s in great structural shape for its age.

The building most recently was assessed at $579,000. The seller was Tom Robinson, who bought the building in 2003 for $35,000. Prior to housing Gallery5, Robinson used the building as a police and fire museum.

Vanderbilt Properties specializes in historic properties and owns about a dozen, mostly residential, in Richmond and North Carolina.

Vanderbilt insisted those are the only two firehouses in his portfolio.

“Yeah, that was not by any kind of intent,” Vanderbilt said, laughing. “It just kind of worked out that way.”

CB Chandler Construction will be the project’s general contractor, and Vanderbilt said they’re selecting an architect.

Vanderbilt said they anticipate the renovation to take about a year and they’re aiming to begin work as soon as possible.

“We have a couple residential properties in Jackson Ward, and I’ve driven past that building at least 100 times,” Vanderbilt said. “Every time I pause and take it in. It’s a great piece of architecture and unique piece of Richmond history.”

Correction: An earlier version of the story, citing city records, incorrectly reported that the old firehouse at 200 W. Marshall St. was built in 1849. The existing building was constructed in 1883.

cant wait to see where it goes, dad!