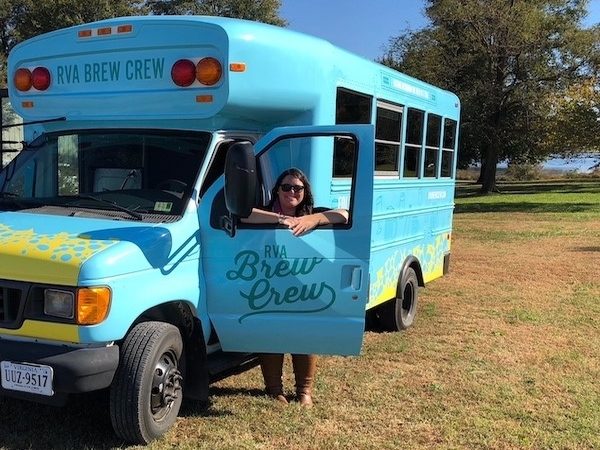 Armed with a converted school bus, a new business is looking to hitch a ride on the region’s beer scene.

RVA Brew Crew launched this month, offering tours to breweries around the area.

The bus goes to mostly breweries, distilleries and cideries, but also hits spots such as The Circuit Arcade Bar and Richmond Wine Station.

Whitten, who lives in the city, said she often wanted to go out to the likes of Lickinghole and Triple Crossing, but shied away for lack of a designated driver.

“The question was always, ‘Who’s going to drive?’ That’s where the idea came from,” Whitten said. “Especially with traveling on the eastern or western routes, it’s not a guarantee you’d be able to get an Uber or Lyft if you’re out in Goochland, especially if you’re traveling with four or more people.”

Whitten put the idea in action after being laid off from her marketing job for an IT firm this year – one week before her wedding.

“It wasn’t good timing by any means, but it gave me extra time to work on the wedding and allowed me to put the dream into action,” Whitten said, laughing. “Once we got back from the honeymoon, we really got the ball running.” 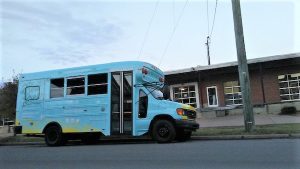 Whitten bought and converted a former Blue Bird school bus that fits up to 14 passengers and runs two routes per day on Fridays and Saturdays, and one on Sundays. Each trip lasts 4 1/2 hours and ranges from $35 to $55 per person. The bus is also available for private rental.

The routes start and end at a parking lot across from ZZQ on Norfolk Street in Scott’s Addition. Whitten said she’s working on adding a route that would allow her to pick up people who live outside the city to go to Scott’s Addition.

Whitten said RVA Brew Crew isn’t quite a party bus, nor is it an educational tour experience.

“We really just are focused on getting people to and from. We’re a festive ride option … It’s a different option from limos and such,” Whitten said.

It’s Whitten’s first time as a business owner, and she’s running RVA Brew Crew full time with help from her immediate family. She plans to hire another driver or two, and hopes to add more buses and routes.

RVA Brew Crew is at least the second booze tour bus to hit the road recently. Last year, Drink Richmond launched, offering rides and tours to a handful of spots around Richmond.

Local brewers are the darlings of local politicians and the local media in Richmond. Like many homeowners, I would love to see someone investigate how much they actually contribute to help our public schools. Richmond real estate taxes rose 7.3% on average in 2018 and some people in the Stoney administration are already demanding a higher rate.

Who in the administration is demanding a higher rate? If you are talking about the Superintendent of Schools then he is not part of the administration as he is hired by the School Board and not the Mayor or City Council. The schools Superintendent does not set the tax rate, the City Council does that. They kept it the same this year, but some people’s bills have increased because their property value has increased. The breweries and distilleries contribute to the schools at least as much as any other business through their taxes. They are also a growing are of… Read more »

Everyone who lives in the city pays the rising real estate tax. If there is any angst, it’s due to the incessant implication that only “some people” are seeing higher property tax bills. Even if you live in a rat-infested one bedroom apartment in a bad section of town, the odds are very great that the assessments in your neighborhood are going up. That being the case, you can be sure your rental company will not hesitate to pass the higher cost on to you in the form of higher rent. As for the booze industry, I’m not an expert,… Read more »

What does your comment about breweries have to do with this article about a brewery tour company? I don’t see any correlation aside from the word “brewery.” I’d advise against assigning breweries as a villain, because whatever brings tourists and millennials into Richmond has a net benefit for all city residents. Otherwise we may have a budget deficit and no way to generate additional revenue. If you want to pick on an entity for not paying its share, then breweries and restaurants are one of the worst places to start. All of them also collect the meals tax, which has… Read more »